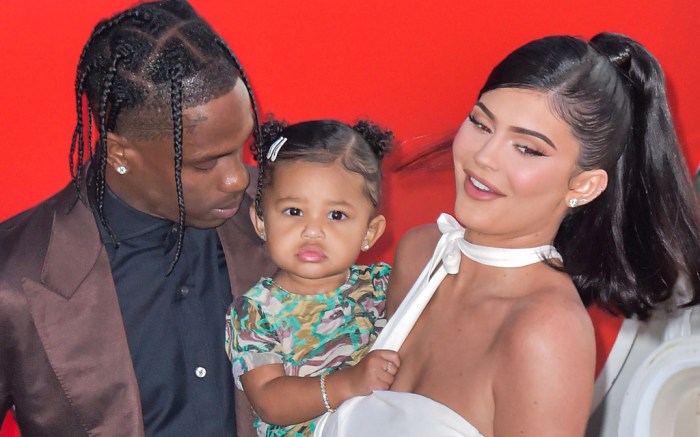 Kylie Jenner, Travis Scott and their daughter Stormi Webster, 2, came together for a sweet family photo in the most on-trend looks.

As seen on Jenner’s Instagram Stories, the trio attempted to take a new picture but the beauty mogul showed the behind-the-scenes struggle of getting a toddler to pose. In the clip, Kylie modeled an all-black look in a crop top with fishnet-accented pants and her favorite $1,470 Prada lug-sole boots; utilitarian, lug-sole boots are set to be one of fall’s biggest footwear trends, beloved by Hailey Baldwin, Madison Beer, Ellie Goulding and more.

While Stormi’s look included a long-sleeve top, jeans and gray sneakers, Scott also showed off his own style in a graphic T-shirt with relaxed slouchy trousers and a set of trending sneakers.

stormi hands them so happy it's so cute she is really too cute, this family is so beautiful💕✨💞 @travisscott @kyliejenner @stormi

The “Astroworld” rapper opted for the Union LA x Air Jordan 4 “Off Noir” collaboration that dropped just two weeks ago on Aug. 29. The pair features a mix of materials displayed across the Jordan Brand’s signature silhouette, combining smooth exposed-stitched suede with black nylon and white netting. A translucent overlay accents the wingtips with pops of icy blue adding contrast to the heel counter. Finished off with a signature Jumpman logo on the tongue, the pairs once retailed for $225 and now have a resale price of anywhere from $980 to $1,800 on StockX.com.

At the start of 2020, though, the celebrity posted photos of herself wearing a series of Swoosh sneakers, leading fans to speculate that her contract with Adidas had expired. Since then, Kylie has continued wearing rare Nike-adorned kicks, including rare Nike Air Yeezys and SB Dunk Lows.

Scott himself is no stranger to the sneaker world, either, having worked with Nike and Jordan Brand for his own selection of footwear that now comes with a hefty resale price. He most recently worked with McDonald’s for a one-of-a-kind collaboration that hadn’t been since Michael Jordan worked with the restaurant in 1992.

Check out the gallery to see more of Kylie Jenner’s own footwear collection over the years.