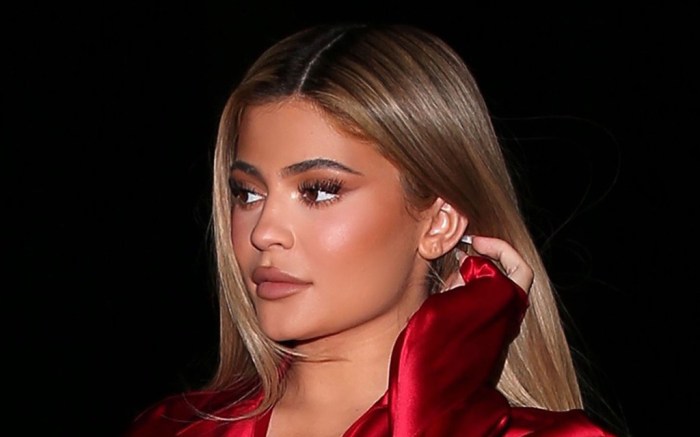 Kylie Jenner opted for an unexpected fall shoe this week to upgrade her off-duty style.

The beauty mogul paused for a quick Instagram Stories mirror selfie on Monday night, showing off her standout look; the outfit layered a dramatic midi-length furry coat over a hidden crop top and high-waisted mom jeans for a chic cold-weather appeal.

When it came down to her footwear of choice, Kylie tapped her brother-in-law Kanye West for a comfy style. The recognizable Adidas Yeezy slides feature the style’s distinctive shark-tooth sole, along with a thick upper band and a chunky footbed.

The styles originally were released in December 2019 but recently rereleased at YeezySupply.com in three colorways. The adult, infant and kids’ sizes of Kylie’s “Bone” iteration are all currently sold out across the market; though they once retailed for just $55, you can now find the adult silhouette on StockX.com anywhere from $199 to $397.

Over the weekend, the Kylie Cosmetics founder debuted another fall-chic look as she hit the town for a Sunday dinner. Stepping out in Beverly Hills, Calif., she opted for a full ensemble from New York-based label LaQuan Smith’s upcoming spring ’21 collection. For the outing, Kylie tucked the silkiest red dip-neck blouse into shiny orange latex pants with a moto-inspired edge; though the bottoms aren’t available yet in the orange shade, a teal iteration of the silhouette once retailed for $1,500 at LaQuanSmith.com.

The media personality then finished off the outfit with see-through PVC pumps.

Beyond her own successful beauty carer with her Kylie Cosmetics line, the youngest Jenner sister herself has held multiple gigs in the sneaker world. She formerly served as a brand ambassador for Puma before joining forces with Adidas in August 2018, exclusively wearing Three Stripes styles in campaigns and across social media.

When she isn’t in sneakers, the “Keeping Up With the Kardashians” star favors everything from Giuseppe Zanotti zebra sandals to Yeezy pumps matched to apparel from Balmain, Bottega Veneta and Marine Serre amongst other top brands.

Slip into your favorite slides for fall just like Kylie Jenner in these comfy pairs inspired by her pick.

Flip through the gallery to discover more of Kylie Jenner’s boldest looks over the years.