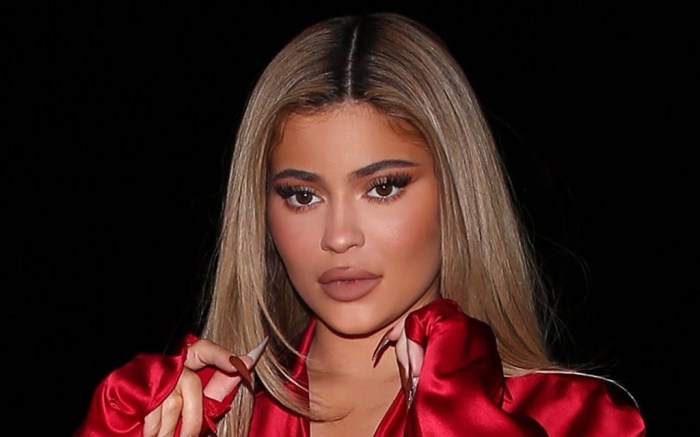 Kylie Jenner went bigger and bolder for her Sunday dinner look, opting for a selection of designer pieces in a chic color combination.

The beauty mogul stepped out in Beverly Hills, Calif. yesterday in a full look from New York-based label LaQuan Smith’s upcoming spring ’21 collection. For the outing, Kylie tucked the silkiest red dip-neck blouse into shiny orange latex pants with a moto-inspired edge; though the bottoms aren’t available yet in the orange shade, a teal iteration of the silhouette once retailed for $1,500 at LaQuanSmith.com.

PVC footwear rose to prominence in 2018 and has since become a staple on the celebrity style scene. Brands like Gianvito Rossi, Christian Louboutin and Givenchy have jumped on the clear shoe train with bold heels and studded designs that flatter the foot and elongate the legs. Kylie’s own sisters are huge fans of the trend and oftentimes frequent styles from Yeezy just like the Kylie Skin founder.


Beyond her own successful beauty carer with her Kylie Cosmetics line, the youngest Jenner sister herself has held multiple gigs in the sneaker world. She formerly served as a brand ambassador for Puma before joining forces with Adidas in August 2018, exclusively wearing Three Stripes styles in campaigns and across social media.

When she isn’t in sneakers, the “Keeping Up With the Kardashians” star favors everything from Giuseppe Zanotti zebra sandals to Yeezy pumps matched to apparel from Balmain, Bottega Veneta and Marine Serre amongst other top brands.

Click through the gallery to have a look at Kylie Jenner’s wow-worthy style transformation over the past decade.