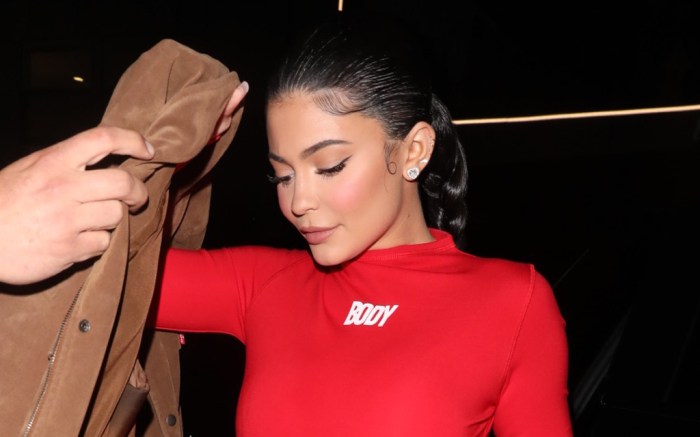 Yesterday, the beauty mogul debuted another buzzy pair as she posed in a one-shoulder black crop top and the baggiest red leather pants. She accented the ensemble with a cherry red shoulder bag with a chain strap, coming from every celebrity’s favorite brand Bottega Veneta; similar designs retail for $3,600 on the brand’s website.

As for footwear, Jenner opted for a pair of must-have sneakers from Virgil Abloh’s continuous collaboration with Nike.

The Off-White x Nike Dunk Low in Jenner’s choice of a “University Red” colorway debuted as part of a series of three releases in December 2019. The pairs transformed the Swoosh brand’s signature low-top design with dual-tone uppers and recognizable Helvetica font details across the medial side. The finishing touch came with a neon bungee lacing system that crossed the entirety of the shoe.

On top of creating her own uber-successful Kylie Cosmetics and Kylie Skin lines, the youngest Jenner sister also has had multiple gigs in the sneaker world. She formerly served as a brand ambassador for Puma before linking up with Adidas in August 2018, exclusively wearing Three Stripes styles in campaigns and across social media.

At the start of 2020, though, the celebrity posted photos of herself wearing a series of Swoosh sneakers, leading fans to speculate that her contract with Adidas had expired. Since then, Kylie has continued wearing rare Nike-adorned kicks, including rare Nike Air Yeezys and SB Dunk Lows from Travis Scott’s collaboration.

Check out the gallery to see even more of Kylie Jenner’s chicest looks throughout the years.