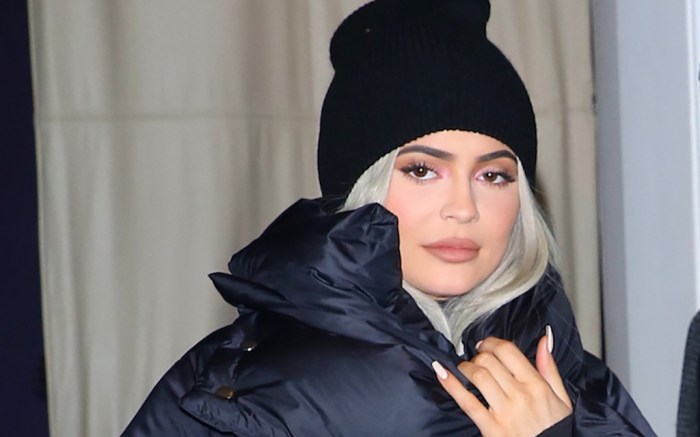 She posed in front of her gold car wearing a fitted jumpsuit featuring an abstract black and white pattern. She paired it with a black crocodile shoulder bag and a set of high-top sneakers by Nike.

once upon a time two scorpios made a leo 🔥🖤🖤

The Nike Dunk SB “MF Doom” released in 2007. The shoes feature a black suede upper with Midnight Fog overlays and reflective piping; the word “Doom” is embroidered on the collar. The style resells for $590 up to $3,500 on resale sites like StockX and GOAT.

In a second post on Instagram, the beauty mogul shared a closer look at the sneakers in the driver’s seat of her car. She also shows off her custom painted nails featuring flower designs from celeb-favorited artist Takashi Murakami; Murakami has previously partnered with FNAA winner J. Balvin, Crocs and more.

Jenner’s career started with reality TV, but has proven to be a savvy entrepreneur. She created a billion-dollar beauty business, which, according to Forbes, makes her the youngest self-made billionaire in the world.

Jenner became a brand ambassador for Adidas in August 2018, but recently has led fans to believe her contract with them recently expired by wearing a series of sneakers from Nike, including an Air Jordan 1 and the “What The” Nike SB Dunk Low. FN reached out to Adidas and a spokesperson at the brand, and they said they could not confirm or deny the terms of Jenner’s contract. Complex reports that a source revealed her Adidas contract ended on Dec. 31, 2019.

Click through the gallery to see Kylie Jenner’s style evolution throughout the last decade.

Is Kylie Jenner’s Deal With Adidas Over?