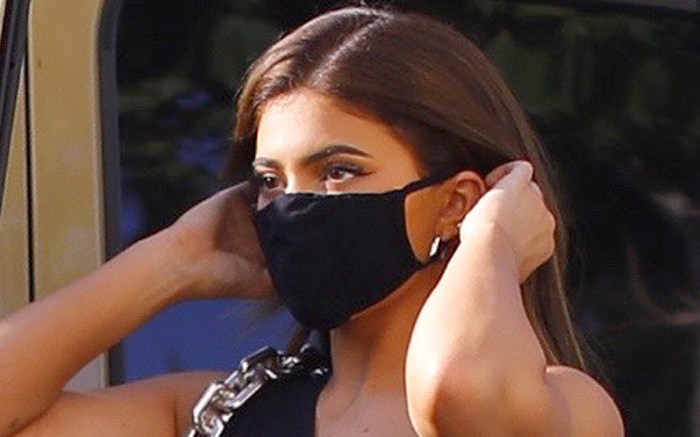 Kylie Jenner headed out for the holiday in style this week.

The Kylie Cosmetics founder jetted off today to an undisclosed location ahead of Christmas Eve but not before she paused for a quick photo op on the runway. The beauty mogul boarded the plane in a ribbed taupe crop top, baring her midriff above her Chrome Hearts jeans; the denim bottoms highlight cheetah patchwork crosses with a high-rise silhouette.

Chrome Hearts cross-coated jeans are a favorite of Bella Hadid, Irina Shayk, Miley Cyrus and more stars with a preference for edgier style; though the standout silhouette is sold out across the web, pairs resell for upwards of $5,000 to $7,000 on Grailed.com.

To keep comfortable in flight, Kylie tapped Off-White and Nike’s hit collaboration for her footwear of the day. The all-white pair bears resemblance to a rare collaborative Air Force 1 sneaker that exclusively debuted at ComplexCon in 2017, in honor of the silhouette’s 35th anniversary. The low-top style boasts a metallic Swoosh design laid over white leather uppers and a chunky foam tongue. Accented with signature Helvetica font across the medial side and midsole, the shoe was part of Nike’s Air Force 1 AF100 pack that also included an Air Force 1 Low by Travis Scott, an Air Force 1 Low by Roc-A-Fella, a Lunar Force 1 by Acronym and an Air Force 1 High by Don C.

Equipped with designer Virgil Abloh’s signature hangtag and orange tab, the Off-White x Nike Air Force 1 retailed originally for $150 but now resells for anywhere from $4,450 to $12,018 on resale sites such as StockX and GOAT.

When it comes to sneakers, Kylie Jenner herself has an impressive history in the industry. Before she was a beauty mogul, the youngest Jenner sister herself has held multiple gigs in the sneaker world. She formerly served as a brand ambassador for Puma before joining forces with Adidas in August 2018, exclusively wearing Three Stripes styles in campaigns and across social media.

At the start of 2020, though, the media personality posted photos of herself wearing a series of Swoosh sneakers, leading fans to speculate that her contract with Adidas had expired. Since then, Kylie has continued wearing rare Nike and Jordan Brand kicks. When she isn’t in sneakers, the “Keeping Up With the Kardashians” star favors everything from Giuseppe Zanotti zebra sandals to Dior knee-high boots to clear Yeezy pumps matched to apparel from Balmain, LaQuan Smith and Marine Serre amongst other top brands.

While Kylie’s Nike sneakers may come with a hefty resale price, you can still achieve her classic sneaker appeal in these all-white pairs from the Swoosh brand.

Flip through the gallery to check out more of Kylie Jenner’s standout looks from her wow-worthy style evolution.