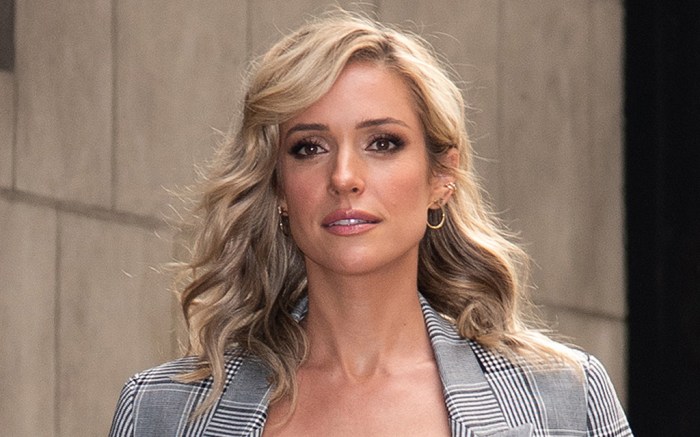 Kristin Cavallari broke out her best western-inspired pieces for a bold look as she promoted her jewelry brand’s newest sale.

The Uncommon James founder took to Instagram to reveal the label’s massive sale last night, posing in front of a scenic lookout in a dramatic fringe leather jacket. The draped accents of the jacket layered over studded black leather short shorts for a biker-chic touch as well.

On her feet, Cavallari rounded out the look with her choice of cowgirl boots.

The lifted style featured a sturdy block heel and a pointed-toe finish, all accented with black and white vegan leather uppers. Recognizable from the subtle logo across the heel, the style comes from Naked Wolfe, a brand known for its standout styles and uber chunky sneakers. Though the pair is sold out, you can find them on resale for $350 at Poshmark.com.

The cowboy boots weren’t the only fall-inspired piece worn by Cavallari this week. On Tuesday, the “Laguna Beach” alumna debuted her newest collection for Uncommon James in printed flannel matched to a silky bustier-style cream dress and gold pieces from the capsule.

While her heeled boots yesterday were more stable, the 33-year-old usually prefers teetering stilettos for her formal occasions — she told FN in 2017 it’s “always” heels over flats. Her collection, highlighting styles from likes of Gianvito Rossi, Prada and Stuart Weitzman, could be seen in her former TV series “Very Cavallari.”

Click through the gallery to discover more of Kristin Cavallari’s street style evolution throughout the years.