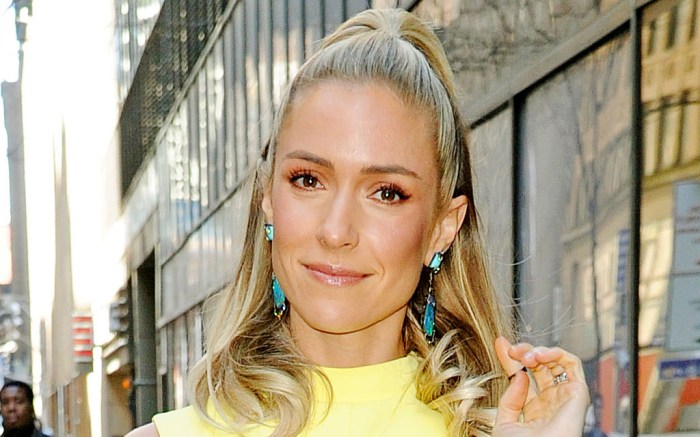 Kristin Cavallari debuted a retro-inspired look this week to promote her own jewelry brand, Uncommon James.

As seen on her Instagram story this morning, the “Laguna Beach” alumna slipped on a pair of on-sale neon pink hoop earrings from her label (available for half off at UncommonJames.com) along with a ’70s-style maxi dress. The square-neck, spaghetti-strap number included pops of pink, brown, yellow and white in a standout design.

Peeping out from underneath the long hem of her dress came a pair of metallic square-toe sandals.

Square-toe footwear experienced a revitalization last summer amongst celebrity style stars, spotted on the likes of Kylie Jenner, Emily Ratajkowski and more throughout the past few seasons. The revamp of the retro footwear falls in line with a growth of ’90s and 2000s-inspired trends like thong-toe footwear, tie-dye prints and low-rise bottoms to name a few.

In addition to trending sandals, Cavallari’s typical everyday ensembles include layers of athleisure and footwear from one brand in particular: Vionic. She prefers the brand’s $130 Giselle style featuring a standout cut-out top, mesh uppers and a multifaceted lacing system. She also has previously modeled the brand’s Alaina silhouette as well with its neoprene and knit fabric uppers. Topped off with adjustable bungee laces, the shoes retail on Vionicshoes.com for $120.

As for her shoes, the 33-year-old usually prefers teetering stilettos for her formal occasions — she told FN in 2017 it’s “always” heels over flats. Her collection, highlighting styles from likes of Gianvito Rossi, Prada and Stuart Weitzman, could be seen in her former TV series “Very Cavallari.”

Click through the gallery to see even more of Kristin Cavallari’s top street style looks over the years.