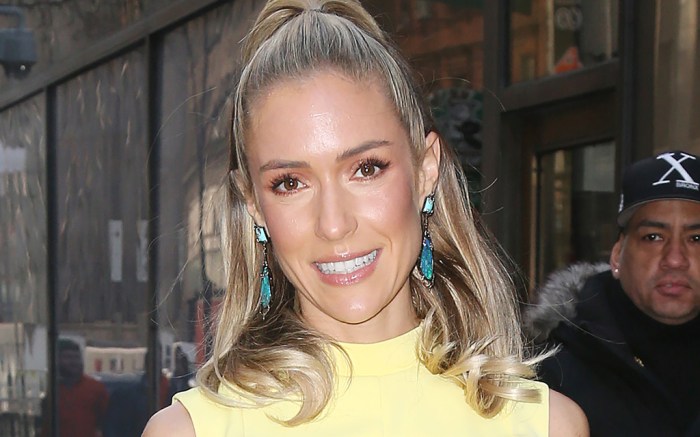 For her first public night out since announcing her split from husband Jay Cutler, Cavallari opted for an all-black look that had plenty of personality. The 33-year-old mom of three hit the streets of Los Angeles this weekend wearing a strapless corset top tucked into a miniskirt, which she cinched at the waist with a gold-accented belt.

For footwear, Cavallari selected a pair of black sandals with a stiletto heel and an almond toe. The lace-up silhouette featured criss-cross straps on the foot with a tie wrapped around the ankle.

Cavallari accessorized her ensemble with gold jewelry from her own brand, Uncommon James, which launched in 2017. She opted for her label’s Cortez earrings, Medallion necklace and Boardwalk bracelet, as well as a Rolex watch. The “It” girl completed the look with a face mask, which has become a must-have accessory these days.

The television personality put together her evening look with the assistance of her longtime stylist Dani Michelle, whose long list of celebrity clients also includes Kourtney Kardashian, Maren Morris, Shanina Shaik and Miguel. Of course, Cavallari also has plenty of her own credentials in the fashion space. In addition to Uncommon James, the actress has a kids’ apparel and accessories brand, called Little James, that she founded in 2018, and she previously partnered with Chinese Laundry on a namesake shoe line.

When it comes to footwear, Cavallari loves her heels — in fact, during a 2017 interview, she told FN it’s “always” heels over flats. In recent months, the A-lister has worn pairs from the likes of Gianvito Rossi, Prada and Stuart Weitzman on episodes of “Very Cavallari.” Nonetheless, these days, the “Laguna Beach” alum’s wardrobe includes plenty of sneakers. For recent workouts, Cavallari has chosen Vionic shoes several times. In particular, she has worn the Vionic Alaina and Vionic Giselle silhouettes.

Cavallari and Cutler, a former NFL quarterback, were together for a decade and were married for seven years before announcing plans to divorce in April. The couple has three children.

Shop the lace-up sandals we’ve rounded up below to get a similar shoe look to Cavallari’s.

Click through the gallery to see more of Kristin Cavallari’s street style.