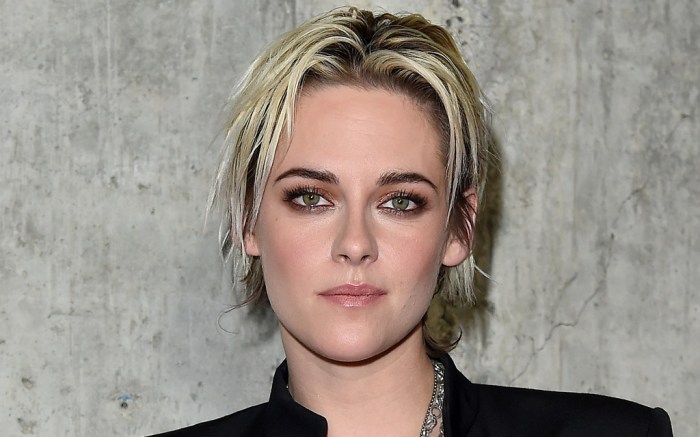 Kristen Stewart gave her edgy style a relaxed twist this week as she continued promotion for her Hulu film, “Happiest Season.”

As shared by her stylist Tara Swennen, the “Twilight” actress opted for an upgraded take on a graphic T-shirt courtesy of Re/done; the $125 tee tucked perfectly into her pleated skort courtesy of Sandro. The Short Skirt style came coated in a houndstooth print featuring Trompe l’oeil pockets and a $295 price tag on the brand’s website.

When it came down to shoes, Stewart selected an on-trend pair from Tamara Mellon. The smooth leather boots highlighted a combat-inspired silhouette with a lace-up front and lifted base. Similar styles from the brand can retail anywhere from $695 to $750 at TamaraMellon.com.

Combat boots and hiking-inspired styles are the new norm amongst celebrity style trends, experiencing a revitalization along with a dew other silhouettes from the 1990s. From brands like Prada, Bottega Veneta and, of course, Dr. Martens, these lug-sole boots offer ease of wear with a grungy-chic appeal. This season, you’ll spot utilitarian boots on the likes of Kylie Jenner, J-Lo, Gwen Stefani and more major stars.

Beyond trending boots, the actress has continued to opt for stylish pieces as she promos her new film. She arrived at the socially distanced premiere of her Hulu Original film on Nov. 17  in a Chanel tweed set complete with an embellished-collared top and a coordinating mini skirt. She then kept safe in a Re/done face mask that sent a clear message: “Love Wins.

On her feet, Stewart boosted her ensemble with surprisingly sustainable heels from Aera, a New York-based vegan footwear label. The Olivia pumps feature black suede-effect uppers with a rounded vamp, pointed-toe front and a 3.75-inch stiletto heel. You can shop the eco-friendly style for $325 at AeraNewYork.com.

As for Stewart herself, the American star’s style can be considered a twist on punky edge, oftentimes opting for darker pieces from brands such as Dr. Martens, Vans, Malone Souliers and Thom Browne amongst other major labels. Dipping her toes into the high fashion world, she signed on as an ambassador for Chanel beauty in 2016 and has since appeared in a series of ad campaigns for the brand on top of continuously sitting front row at all the label’s runway shows.

Click through the gallery to see more of Kristen Stewart’s on-trend looks throughout the years.