Kristen Stewart Has a Retro Moment in a Knit Bralette, Bright Pants & Nikes 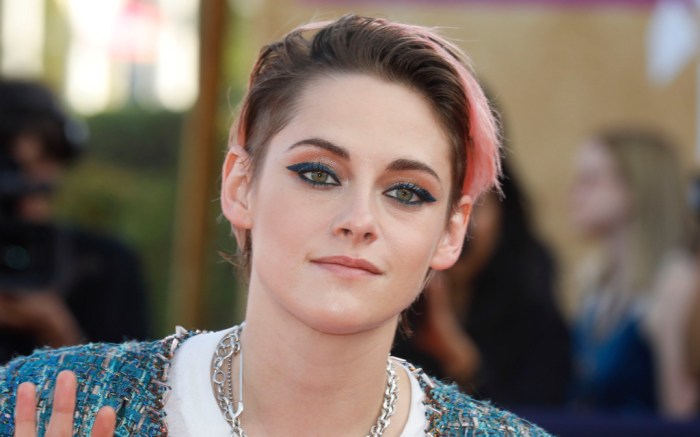 Kristen Stewart combined a mix of retro trends this week as she appeared on “The Today Show” to promote her new film, “Happiest Season.”

As shared by her stylist Tara Swennen yesterday afternoon on Instagram, the “Twilight” alumna posed in a mix of color blocking pieces. The outfit included a knit brown bralette layered under a pale yellow button-up shirt and blue tailored trousers; the Soft Twill bottoms come from St. John, retailing for $995 on the brand’s website.

The retro-inspired pieces didn’t stop at her apparel, either. KStew threw it back to the 1970s with her choice of Nike footwear. The Nike Cortez sneaker debuted in 1972 and has since become a staple for the brand; featuring a low-top silhouette, the Swoosh-adorned pair includes leather panels contrasted with faux leather reinforcements for a long-lasting fit.

Set with foam cushioning and a rubber outsole, the classic Nike Cortez in Stewart’s black and white colorway retails for $70 at Nike.com.

Despite all the ups and downs of 2020, Nike still remains one of the top brands for everything from footwear to apparel on the merchandise side in addition to its continuous social justice initiatives and strong stances in the face of inequality. The brand’s Dunk silhouette has been the star of the year, highlighted in collaborations with anyone who is anyone — think Ben & Jerry’s, Grateful Dead, Travis Scott and more. The Nike Dunk even earned the titled of the 2020 Shoe of the Year for the upcoming FN Achievement Awards.

As for Stewart herself, the American star’s style can be considered a twist on punky edge, oftentimes opting for darker pieces from brands such as Dr. Martens, Vans, Malone Souliers and Thom Browne amongst other major labels. Dipping her toes into the high fashion world, she signed on as an ambassador for Chanel beauty in 2016 and has since appeared in a series of ad campaigns for the brand on top of continuously sitting front row at all the label’s runway shows.

Give your style a retro-chic twist with these Nike styles inspired by Kristen Stewart’s look.

Click through the gallery to discover even more of Kristen Stewart’s standout footwear moments over the years.