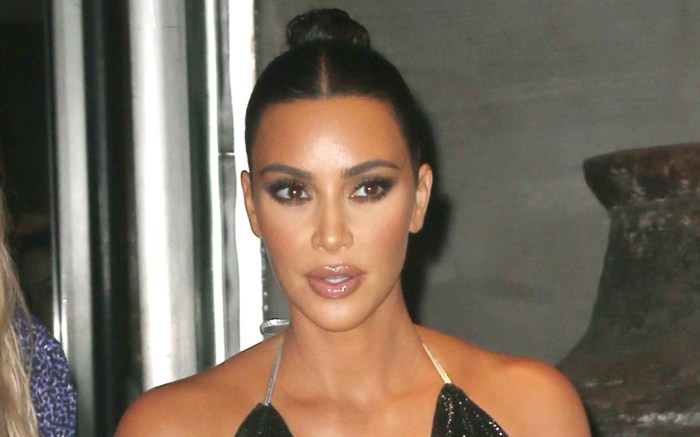 On Monday, the reality star shared a photo and video on her Instagram Story, which shows her modeling a pair of Yeezy Slide V2s made by her husband Kanye West. The chunky slides feature an upper with a hole design, and a thickly ribbed outsole.

The shoes appear to be made of foam and rubber like the brand’s Yeezy Slide Cores that were launched in 2019, and came in shades Desert Sand, Bone, and Resin. The Yeezy Slide V2s that Kardashian debuted are mustard in color. It is not immediately clear if there will be other variations, or when the sandal will be released.

Kim showing the new Yeezy slides, as well as all of the recent/upcoming colorways via IG: pic.twitter.com/F2rvpslZyV

Kardashian also showed off a plethora of new sneaker colorways. In the clip, a pair of Yeezy 700 V3 are shown with a navy tongue and upper and sky blue detailing on the sides.

Next, Kardashian showed a variety of Yeezy Boost 350s with new mosaic-like patterns. One shoe featured a yellow and purple colorway while another appeared to be blush and taupe. A different pair appeared to have a snakeskin design with embellished accents.

The SKIMS founder additionally showcased more fashion on her feed.

She posted a slideshow of photos of herself dressed up in Twitter blue leather wide-leg pants, a popular trend among celebrities, including her sister Kourtney Kardashian, for the fall. Kim paired the top with a fitted caramel turtleneck, allowing for the pants to pop.

As for footwear, Kim kept with the blue theme by sporting a pair of Begum Crystal Embellishment Slingback pumps from Amina Muaddi. The transparent sandals feature the designer’s signature pyramid heel and jeweled buckle detail. The shoes, which retailed for $1,295 are currently sold out online. Saks Fifth Avenue offers a similar style for $1,070. Muaddi and her partnership with Rihanna’s Fenty will receive Collaborator of the Year Award at the 2020 FNAAs.

Shop similar blue pointed toe pumps as Kim Kardashian with these picks below.