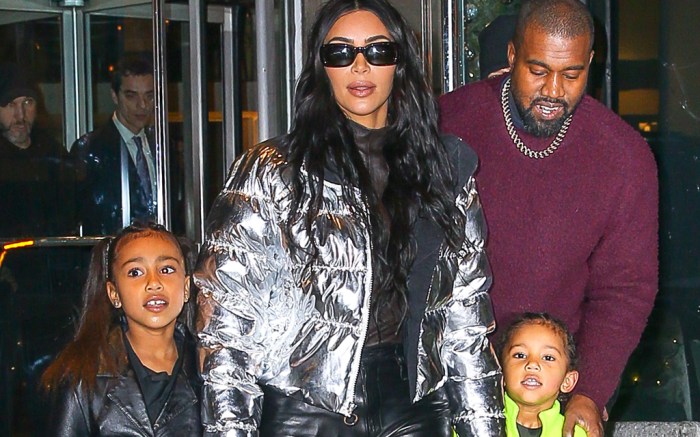 Kim Kardashian got her four kids together for a sweet family portrait with one common theme: Yeezy.

The media personality shared a new snap of her children yesterday as they all showed off their growing unique styles and individual footwear choices. Kim’s oldest daughter North West, 7, chose an oversize purple T-shirt worn as a dress with Adidas Yeezy slides; her choice of footwear matched her brother Saint, 4, as he also opted for the same brown colorway of the sandals to team with his camouflage tee and neon shorts. The “Earth Brown” colorway for kids retailed for $45 at its April drop but now resell for $149 to $242 at StockX.

Chicago’s shoes came in the form of mini Adidas Yeezy Qntm sneakers for infants, a bold style with a translucent midsole and striped uppers; dropping earlier this month for $160, the pairs are now available at StockX for anywhere from $160 to $242.

As for the youngest member of the Kardashian-West family, Psalm chose to match his father in a miniature version of the wild Yeezy Foam Runners. With its never-before-seen details and striking divergence from typical sneaker creations, the shoe is formed from a harvested algae foam for an aerodynamic appeal. Adult sizes resell for upwards of $698 whereas kids’ sizing isn’t even available yet on the public market.

As for Kim Kardashian, though she was not pictured, the “Keeping Up With the Kardashians” herself star oftentimes favors apparel from her husband Kanye West’s Yeezy collections for footwear and apparel in addition to sneakers and boots from his Adidas Yeezy line. She styles the pieces with coordinating looks from Balmain, Balenciaga, Stuart Weitzman and Bottega Veneta.

Beyond stylish looks on and off the set, Kim also dipped her toes into the fashion and beauty world with a mix of ventures. She created her Skims shapewear line in 2019, featuring a mix of inclusive designs and now affordable face masks too. Additionally, the media personality also founded her own makeup line, KKW Beauty, last fall.

Click through the gallery to see more times the Kardashians opted for Adidas Yeezy footwear over the years.