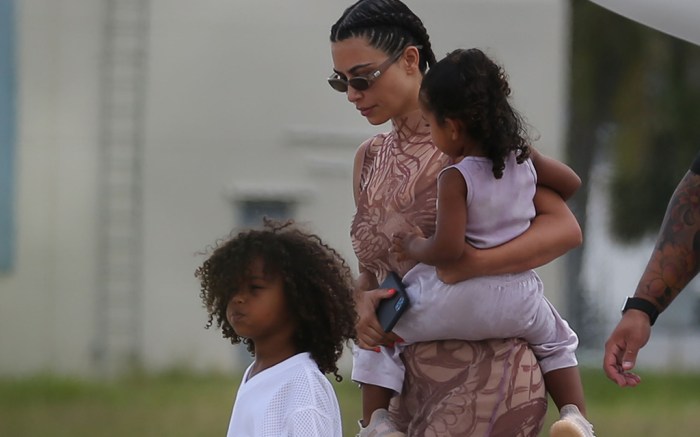 Kim Kardashian and Kanye West touched down in Miami today, returning home from their 7-day family vacation in the Dominican Republic. The “Keeping Up With the Kardashians” star could be seen in a sheer patterned nude dress and fashionable eyewear.

She sported this summer’s “ugly” sandal trend in a pair of her husband’s Yeezy slides. Their four-year-old son, Saint, matched with a pair of his own Yeezy kids’ slides.

West took a more relaxed approach wearing a white hoodie and cargo pants with his classic black sunglasses. He topped the outfit off with his Adidas Yeezy Foam runners.

he Yeezy Foam Runner is just one of the latest shoe designs Kanye has put out. The “Ararat” colorway debuted in June with a $75 retail price tag during a surprise drop on YeezySupply.com. With comparisons to Crocs’ classic clogs, the unique silhouette became an anticipated shoe, thanks to its never-before-seen accents and striking divergence from typical sneaker creations. Made from a harvested algae foam, the aerodynamic shoes now resell anywhere from $332 to $2,999 on StockX with prices starting at $258 and ranging up to $575 from GOAT.

The couple decided to spend some time in the Dominican Republic with their four kids after Kanye publicly announced via Twitter in July that he had been trying to divorce Kim for two years. The family kept their vacation private, staying in Villa Tartaruga at the exclusive Puntacana Resort and Club. There has been no announcement yet pertaining to their marital status.

Kanye’s allegations come after his July 4 announcement to run for a presidential bid. He confirmed his original tweet in an interview with Forbes when he stated that he was done with President Donald Trump, who he has publicly endorsed for years.

If Kanye were to become president in 2020, he would be the second straight billionaire in the White House. In April, Forbes estimated Kanye’s net worth is about $1.3 billion. That figure includes $1.26 billion from the A-lister’s Yeezy empire, as he owns 100% of the Yeezy brand. The designer’s net worth additionally includes $102 million in real estate holdings, as well as roughly $90 million from his musical label and his recording and publishing rights.

While Kanye dabbles in politics, Kim has stuck to the fashion industry, recently launching a new selection of pieces for her Skims shapewear collection on July 21. The collection featured sleek, sexy basics in four colors including a power mesh waist trainer designed to increase support and cover the lower stomach, while offering three levels of toning.

When it comes to overall personal style, Kim oftentimes favors apparel from her husband’s Yeezy collections as well. She styles the pieces with coordinating looks from Balmain, Balenciaga, Stuart Weitzman and Bottega Veneta.

On top of her Skims shapewear collection, the media personality also founded her own makeup line, KKW Beauty, last fall.