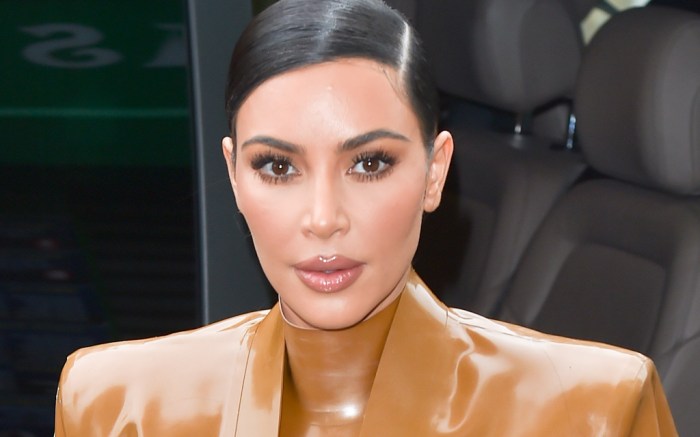 Kim Kardashian made a splash in an all-brown leather ensemble as she posed alongside husband Kanye West on Instagram today.

The “Keeping Up With the Kardashians” star looked stylish in a jumpsuit from Mowalola Ogunlesi, which featured wide legs and cut-out accents on the sides. The KKW Beauty businesswoman teamed the jumpsuit with brown pointed-toe boots set on a slim stiletto heel. She wore her hair pulled back into a sleek updo, accessorizing with dark sunglasses and statement earrings. Meanwhile, West was clad in a shiny black suit paired with a neon green shirt and clunky brown boots.

Ogunlesi has been named the design director of Yeezy Gap, a multiyear partnership that West, Yeezy’s owner, announced on Friday. A Nigerian-British designer, Ogunlesi attended Central Saint Martins and made her London Fashion Week debut last year. She is known for using leather, cut-out accents and bold patterns — the former two of which appeared in Kardashian’s ensemble.

When it comes to her personal style, Kardashian can often be found in designer footwear from the likes of Manolo Blahnik, Balenciaga and Gianvito Rossi. The mega influencer also is a fan of sneakers from husband Kanye West’s Adidas Yeezy brand, which she frequently pairs with his apparel designs.

While Kardashian catapulted to fame through reality television, she has parlayed her stardom into a global brand — using her name to secure multiple money-making ventures. According to Forbes, the A-lister has a net worth of $350 million and raked in $49.5 million last year. The money magazine says the bulk of Kardashian’s wealth comes through her KKW Beauty label, which generated $100 million in sales last year. In addition, 2019 saw the launch of Kardashian’s successful Skims shapewear label, an inclusive line that is available for purchase on Skims.com and at Nordstrom.

Although Kardashian’s net worth is nothing to sneeze at, it pales in comparison to her husband’s. According to Forbes, the Adidas Yeezy line likely made about $1.3 billion in revenue for 2019, with West taking home approximately $140 million of that. West’s net worth reportedly sits at $1.3 billion, with $1.26 billion of that coming from Yeezy, along with $102 million in real estate holdings and roughly $90 million from music (including the star’s label as well as with his own recording and publishing rights).

For a similar shoe look to Kardashian’s, consider purchasing one of the pairs we’ve rounded up below.

Click through the gallery for a look at Kim Kardashian’s risk-taking style over the years.