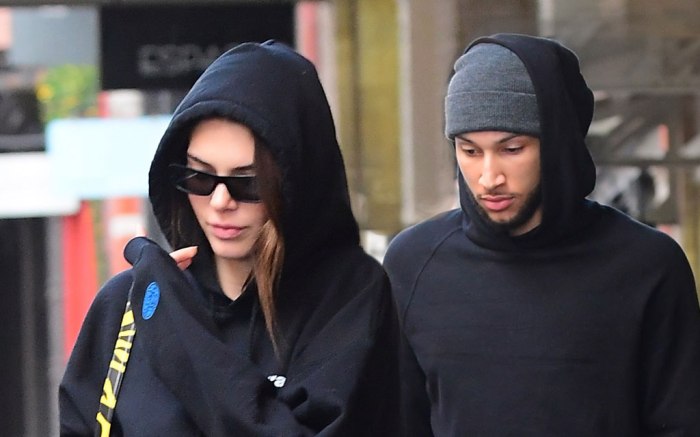 The supermodel stayed cozy in a black hoodie — worn with the hood up for an incognito look — and matching yoga pants. The pants had a split front, perfect for highlighting Jenner’s footwear: a pair of Nike Air Force 1 sneakers.

Originally introduced in the ’80s as a basketball shoe, the Air Force 1 has become a favorite among “It” girls such as Kaia Gerber, Hailey Baldwin and Bella Hadid. The silhouette has a full-grain leather upper, a low-cut silhouette and padding at the collar for increased comfort. It’s available at Nike.com for $90.

Jenner accessorized with teensy sunglasses and a yellow zebra-print handbag. The bag came from Kwaidan Editions; while no longer available to shop in the star’s chosen colorway, it can be purchased from Farfetch.com in tiger print for $540 (30% off) now.

Simmons also appeared to have gotten the cozy Sunday memo. The Philadelphia 76er cozied up to his girlfriend wearing a hoodie, joggers and white Nike sneakers. He accessorized with a gray beanie and a gold watch.

Of course, both Jenner and Simmons had the standard New York color palette — mostly black — down pat. If not for Simmons’ conspicuous 6-foot-10 height, they could have passed for any other couple in the Big Apple. The same can’t be said of all of Jenner’s looks: She can often be found in statement-making footwear from the likes of Yeezy, Amina Muaddi and Alexander Wang.