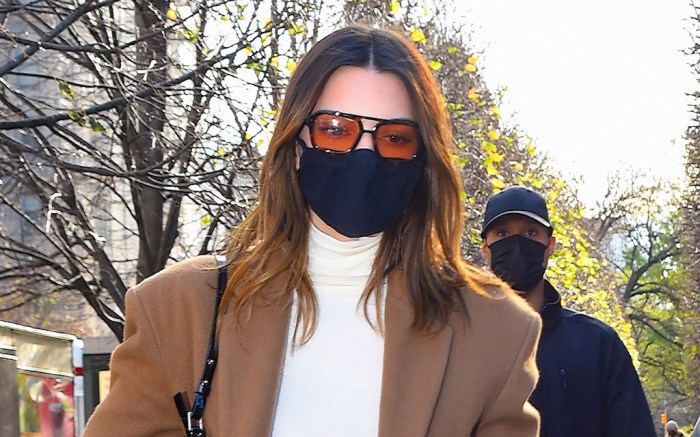 Kendall Jenner brought her fall-chic style to New York this week and it did not disappoint.

Seen out with fellow star Bella Hadid, the supermodel took to the streets of Manhattan in a bundled-up ensemble. The outfit included everything from a white turtleneck top and navy oversize trousers to a cinched-waist brown soft trench coat. Kendall even went a bit incognito in a fuzzy hat, Dixie sunglasses by Vehla Eyewear and a protective face mask. The outfit also included Missoma earrings and a By Far bag.

The real kicker of the media personality’s ensemble came with her choice of footwear. The low-top kicks appeared to be Nike’s SB Dunk Low “Trail” sneakers from 2007. The hit style features smooth brown suede overlays atop white leather uppers and all contrasted with an embossed black Swoosh. While the low-top style once retailed for under $250 over a decade ago, the resale market now lists the style for up to $1,500 at StockX.com.

Despite all the ups and downs of 2020, Nike still remains one of the top brands for everything from footwear to apparel on the merchandise side in addition to its continuous social justice initiatives and strong stances in the face of inequality. The brand’s Dunk silhouette has been the star of the year, highlighted in collaborations with anyone who is anyone — think Ben & Jerry’s, Grateful Dead, Travis Scott and more. The Nike Dunk even earned the title of the 2020 Shoe of the Year for the upcoming FN Achievement Awards.

Beyond her personal shoe style, the “Keeping Up With the Kardashians” star previously starred in campaigns for Longchamp, Stuart Weitzman, Versace and other major fashion powerhouses. Together Kendall and Kylie successfully an eponymous brand as well; the Kendall + Kylie label serves up apparel, footwear and accessories.

While Kendall Jenner’s version of the Nike Dunk comes with a hefty resale price, you can still get in on all the Swoosh action with these next pairs.

Click through the gallery to discover more of Kendall Jenner’s impeccable style evolution throughout the years.