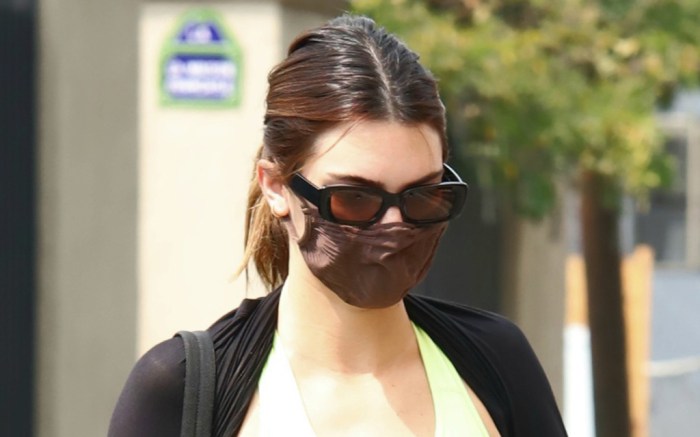 Kendall Jenner just put herself in the running for a top athleisure look with her lunch date ensemble today.

The model stepped out for lunch with Hailey Baldwin in Los Angeles this afternoon, sporting a spandex shrug layered over an unmissable neon sports bra from Adidas over high-rise all-black leggings; similar sports bras can be found on sale for $30 at Adidas.com.

The look reached a new level when it came to Jenner’s choice of sleek footwear. The lace-up sneakers come from Off-White’s beloved collaboration with Nike, originally releasing in June 2018. The Off-White x Nike Zoom Fly Mercurial sneakers feature all-black uppers made from full Flyknit material, keeping the foot locked down while still allowing for breathability and ease of wear. Helvetica font details, a signature from Virgil Abloh’s line, decorate the midsole and medial panels. Rainbow accents on the midsole as well create a pop of color, finished off with oversize dots, an allusion to prime spots to strike a soccer ball on the foot.

Beyond her personal shoe style, the “Keeping Up With the Kardashians” star previously starred in campaigns for Longchamp, Stuart Weitzman, Versace and other major fashion powerhouses. Together Kendall and Kylie successfully an eponymous brand as well; the Kendall + Kylie label serves up apparel, footwear and accessories.