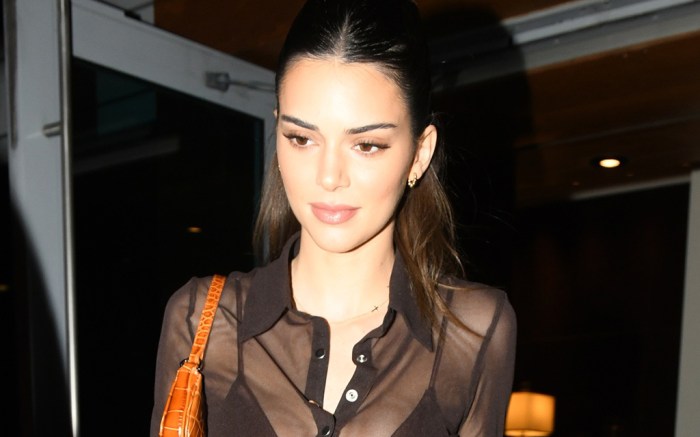 It may be 2020, but Kendall Jenner looked every bit the ’90s “It” girl as she exited her hotel in Miami last night.

The supermodel was spotted in a sheer black blouse that seemed very much like something Jennifer Aniston or Winona Ryder would have worn back in day. The way she styled the top — with a pair of high-waisted mom jeans — was also very pre-Y2K. And as if that weren’t enough, Jenner capped off the look with a By Far mini bag called the Rachel, a reference to Aniston’s “Friends” character. The purse sells for $305 on Farfetch.com.

While there are plenty of on-trend, ’90s-inspired shoes Jenner could have gone for — think square toes and high-heeled thong sandals — she instead opted for a pair of sneakers that are truly timeless. The “Keeping Up With the Kardashians” star chose the Nike Air Force 1, which began its life as a basketball shoe and since transformed into a lifestyle staple.

The silhouette features a crisp all-white leather upper with silver hardware and a rounded toe. It sells for $90 on Nike.com.

AF1s seems to be one of the A-lister’s favorites, as she’s been spotted in them several times recently. She wore them with a casual outfit — a sweatshirt and yoga pants — last month for a brunch date with boyfriend Ben Simmons.

Jenner isn’t the only celebrity fan of Air Force 1s. Other proponents include Hailey Baldwin, Bella Hadid and Ciara.

Click through the gallery to see how Kendall Jenner’s style has evolved over the years.