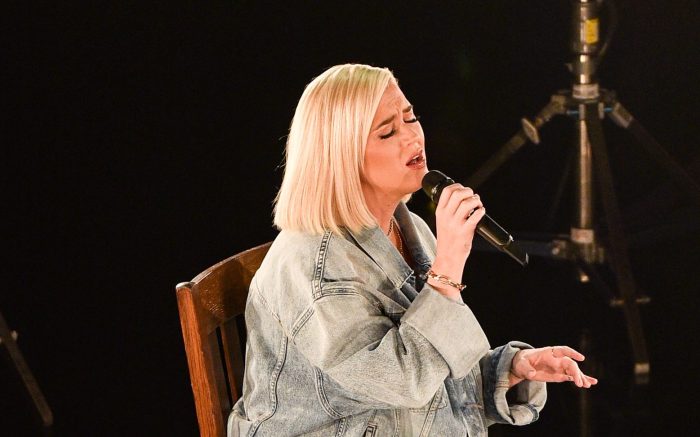 Katy Perry opted for a relaxed, yet chic ensemble while performing at the 2020 American Music Awards on Sunday.

The singer, who recently welcomed her first child with fiancé Orlando Bloom, kept it cool, wearing a light wash Canadian tuxedo while performing “Only Love” with Darius Rucker.

Perry looked comfortable and trendy in a loose fitting denim jacket by Acne Studios, which she wore closed and cuffed. Underneath the jacket, Perry wore a simple white tank. She paired the denim jacket with straight leg jeans that stopped just below her ankles. Perry accessorized the look with gold jewelry and soft glam.

As for footwear, Perry opted for a pair of white croc-embossed leather heels from Schutz. The heels, which featured a subtle stiletto and a squared toe, finalized the look, giving it a slightly dressed up approach. The style is available on the brand’s website for $98.

Perry shared photos from her performance on Instagram, captioning it: “Went back to church, met a new friend @dariusrucker and found #OnlyLove.”

The Weeknd and Roddy Ricch are in the lead this year as both artists have received eight nominations, including Artist of the Year. The Weeknd already scored Favorite Song for “Heartless.”

Megan Thee Stallion is up for five awards, making her the most-nominated female artist this year. Her nods include, New Artist of the Year and Collaboration of the Year alongside Cardi B for their breakout track “WAP.”