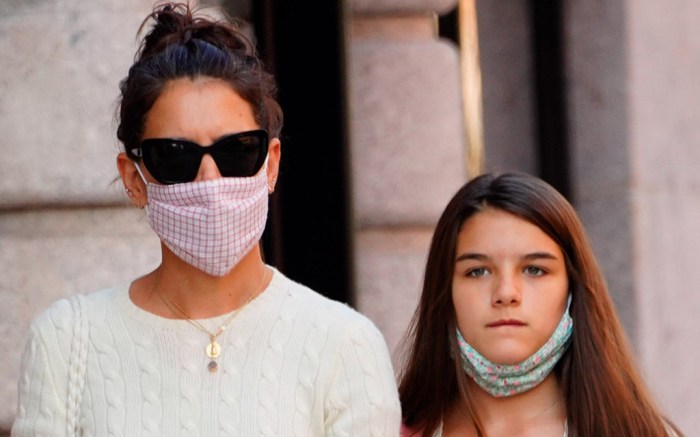 Katie Holmes and her daughter Suri Cruise, 14, showed off their coordinating mother-daughter style this week on an ice cream run in New York.

Walking home on the streets of Manhattan yesterday, the duo both opted for fall-ready looks with printed face masks to tout. As Holmes decided on a knit sweater and baggy mom jeans, her daughter followed a similar route in a layered cardigan and flare-leg black jeans. While Holmes’ look echoed style trends from the 1990s, Suri’s outfit pulled inspiration from the early 2000s.

When it came to footwear, both mom and daughter decided on relaxed shoes for the stroll. The “Dawson’s Creek” actress’ choice came in the form of a slip-on green satin mule from Le Monde Beryl with ruched uppers and a contrast brown outsole. Her teenage counterpart stayed comfortable in classic all-white lace-up sneakers, echoing Holmes’ favorite Common Projects silhouette.

Together under the guidance of Katie Holmes and Tom Cruise, Suri has already developed into a young fashion star. Her effortlessly cool taste includes everything from classic Ugg boots with ripped jeans to a boho-chic ensemble with a flowing red blouse, white camisole, yellow midi skirt and  Adidas Gazelle kicks. She also previously sported a Holmes-inspired look with a white collared shirt with puff sleeves amd light-washed mom jeans, another staple of her mom’s closet as well. Her choice of footwear echoed her shirt, walking in all-white Adidas Superstar sneakers that also retail for $80 at Adidas.com.

As for Holmes herself, the star of “The Secret” movie oftentimes favors on-trend silhouettes that are just as stylish as her outfit of choice. The 41-year-old is known for her top-of-the-line style, often revisiting her go-to colder weather ensemble: an oversize coat with streamlined pants and easy-to-wear shoes. She matches the combo with everything from Veja sneakers to flared-heel Dorateymur boots. As the weather heats up, though, you can find the actress in flowy dresses, more lightweight tops and a rotation of easy-going pieces.

Beyond off-duty style and impeccable footwear taste, Katie Holmes’ experience in the fashion industry earned her the title of an Olay brand ambassador; she also previously served as the face of Bobbi Brown Cosmetics, Miu Miu, Ann Taylor and more top brands throughout her successful career.