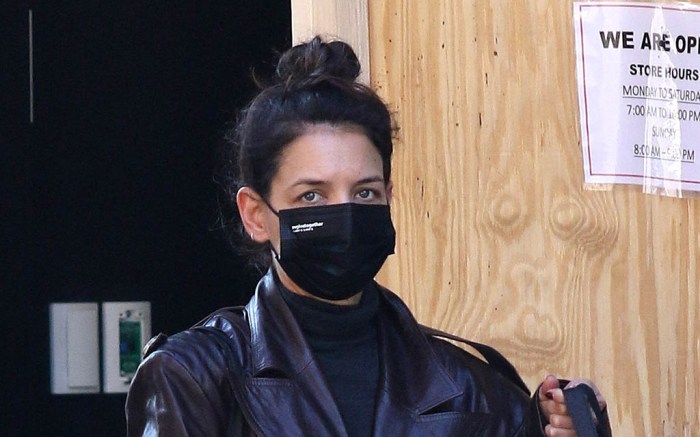 Katie Holmes stepped out to do some shopping in style on Wednesday, wearing one of Hollywood’s most sought after trends.

The actress sported a Magda Butrym brown leather trench coat, which is available for purchase at magdabutrym.com for $3670, while at a supermarket in New York. She paired the look, which has been seen on Zoe Kravitz and Kourtney Kardashian in recent months, with a pair of white velcro sneakers as she carried multiple recyclable shopping bags.

Underneath the trench, Holmes opted for a black turtleneck and black trousers. She pulled the ensemble together with a Strathberry Lana midi bicolor bucket bag, which retails for $700 at Nordstrom.com.

As we approach the colder months, leather is no new concept, but was featured heavily on the fall 2020 runways. New iterations of leather coats, including trenches, were seen at Fendi, Miu Miu, Salvatore Ferragamo and more.

Brown and other earth tones were also projected to be big for fall as seen during Stella McCartney, Balmain and Chloé’s fall 2020 shows.

Holmes’ fashionable sighting on Wednesday comes after she showed off her trendy style when out with her beau, Emilio Vitolo Jr. on Tuesday night in New York.

For the outing, Holmes opted for a layered ensemble, wearing an orange hoodie under a tan trench coat. She paired the outerwear with light-wash denim, a wide-brim hat and black lace-up combat boots — another must-have trend of 2020.

The boots aren’t the only on-trend shoes Holmes, who has been known for her impeccable wardrobe, has flaunted this fall.

Last month, Holmes and Vitolo Jr. took her daughter Suri Cruise for a bike ride around town, for which Holmes sported low-top all-white sneakers with smooth leather uppers. The shoes, which are a wardrobe staple, resembled Holmes’ go-to silhouette from Common Projects, which retail for $425 and are available at Nordstrom.com.