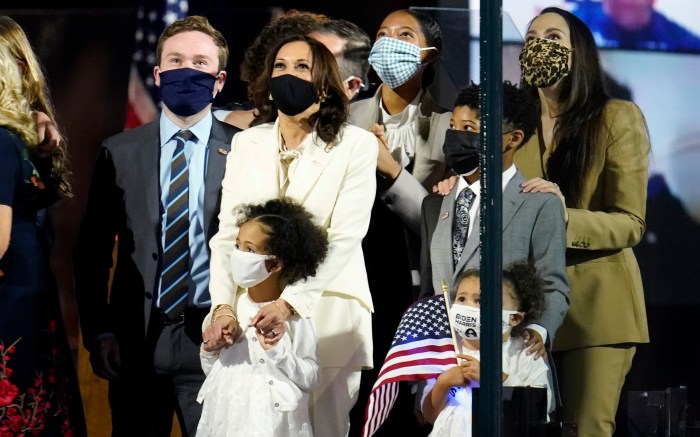 Dr. Martens boots have been a must-have this fall as the trend has been seen on Diane Kruger, Heidi Klum and more. The look has been popular among children too. North West famously wore sparkly iridescent Dr. Martens at her dad Kanye West’s Sunday Service last year.

Meena shared a sweet photo of her daughters with the vice president-elect on Saturday, showing the girls jumping for joy while holding hands with Harris. “VICE PRESIDENT AUNTIE 🇺🇸” Meena captioned the post on Instagram.

Meena shared an additional photo of her girls, posting a shot of them talking with President-elect Joe Biden. “She’s been talking about this moment non-stop for weeks, and it finally happened,” Meena wrote alongside the photo.

She’s been talking about this moment non-stop for WEEKS, and it finally happened.

The girls sported another trend earlier this month when they touched down in Pennsylvania to reunite with Harris after a year.

“They haven’t seen her in person since last year 🥺,” Meena captioned the post, which shows the girls hugging Harris. The tots wore fashionable tan coats with UGG boots.

Like her grand-nieces, Harris also wore white to accept her victory on Saturday night.

For the celebratory and momentous moment, Harris, who became the first woman and first woman of color elected as vice president, delivered a powerful victory speech while dressed in white suffragette Carolina Herrera suit. The color honored generations — from the women who led the suffrage movement a century ago to her late mother to the little girls across America who “see this as a country of possibilities.”