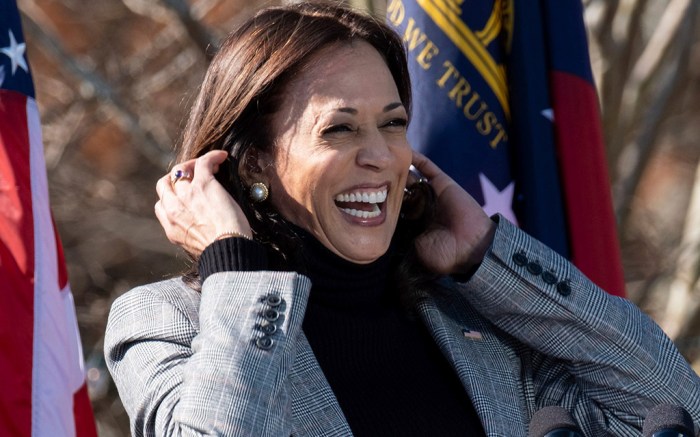 Kamala Harris made her way down to Georgia yesterday to campaign for Democratic U.S. Senate challengers, Rev. Raphael Warnock and Jon Ossoff, ahead of the upcoming runoff elections in January.

Arriving in Columbus, Ga., on Monday afternoon, the vice president-elect spoke to crowds as she took the stage in a black turtleneck sweater layered with a checkered blazer and tailored black trousers.

On her feet, Sen. Harris opted for a sleek take on the square-toe footwear trend. The lifted boots came set atop a sturdy block heel with smooth patent leather uppers and a sock-inspired fit.

Square-toe footwear returned to the scene in 2019 and has continued into this year as a major cross-seasonal trend. Be it a classic boot, a flat slide or a towering stiletto heel, the minimalistic silhouette falls in line with a ’90s-inspired revitalization of fashion, as seen with combat boots and thong-toe shoe styles, as well as pops of neon color across apparel and footwear.

When it comes to her own personal style, the vice president-elect can be found in a mix of in-style silhouettes including sneakers from one brand in particular: Converse. The brand’s Chuck Taylor All Star silhouette is one of the politician’s most beloved footwear styles. She opts for a low-top version of the classic sneakers in a relaxed black and white colorway. The style is known for its retro look with exposed stitching, textured outsole and contrasting toe cap, all accented with signature All Star logos and patches.

While Sen. Harris’ go-to colorway from the brand may resemble a normal combination, the pair actually switches out the usual canvas uppers with smooth leather fabric, giving it a more glam appeal. The Chuck Taylor All Star Leather retails for $55 at Converse.com.

When she isn’t in Converse, the future vice president also prefers footwear from a few top brands including everything from Prada booties to Timberland work boots.

Click through the gallery to discover more of Kamala Harris’ top footwear moments throughout the years.