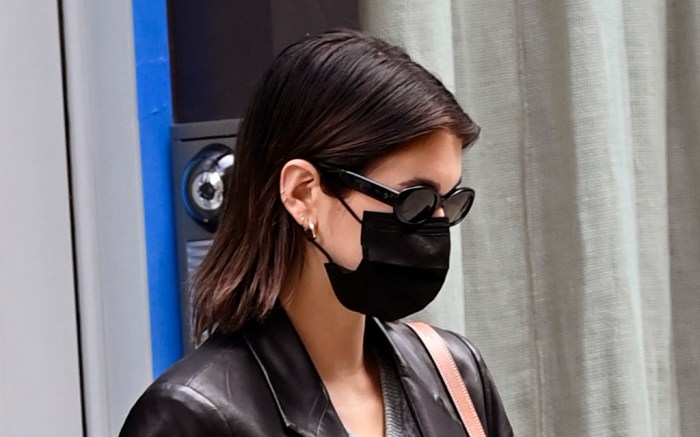 Kaia Gerber jetted out of town this weekend alongside “Euphoria” actor Jacob Elordi.

The duo left an apartment in New York on Sunday to head to JFK International Airport and both debuted casual-chic outfits ahead of their flight. Kaia layered a sleek Imaan x Frame leather blazer over an argyle gray sweater and classic black biker shorts with Ray-Ban shades for her look of the day

The daughter of Cindy Crawford decided on a set of chunky “dad shoes” from none other than New Balance, one of her many go-to brands for sneakers. The all-white pair resembles the brand’s 624 silhouette and is recognizable from its injected foam midsole, giving it a lifted look, as well as its ’90s-inspired leather uppers and outlined N logo. The New Balance 624 in Kaia Gerber’s choice of an all-white style retails for $75 at NewBalance.com.

As for Jacob Elordi, the “Kissing Booth” star went incognito in a gray hoodie and matching athletic shorts as he covered his face with reflective shades and a face mask.

Whereas Gerber went for chunky shoes, her companion chose a more streamlined style. The 6-feet-5-inches tall Australian actor opted for $495 Golden Goose sneakers, complete with a green star across the lateral side and a logo adorned set of laces. Similar pairs can be purchased at Farfetch.com.

As for Kaia Gerber’s own personal street style, the 19-year-old model tends to mix it up between relaxed athletic looks and on-trend casual ensembles. Her favorite brands for workout gear include Reebok, Adidas x Alexander Wang, Bleu Salt and Shadow Hill amongst others whereas her more dressed-up looks feature pieces from By Far, Reformation, Converse and more beloved labels.

Throughout her blossoming career, the teenager has already served as the face of major labels such as Jimmy Choo, Chanel and Stella McCartney as well as walking in runways for Longchamp, Miu Miu, Givenchy and most other well-known fashion houses.

Check out the gallery to see more of Kaia Gerber’s coolest sneaker looks over the years.