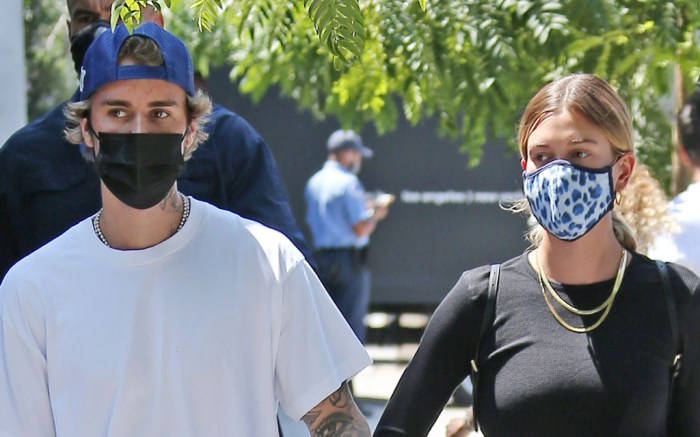 Justin Bieber debuted one of his wildest footwear looks ever for a lunch date with wife Hailey Baldwin.

The “Yummy” singer stepped out in Los Angeles yesterday wearing a plain white tee layered over graffiti tie-dye shorts while Baldwin opted for a more subtle look in a black long-sleeve top, denim shorts and a $38 Michael Stars mask.

As for footwear, it was Bieber that took the cake for the boldest choice of the couple. Topping off a pair of Vetements x Reebok crew socks, the musician opted for a pair of slip-on shoes from Kanye West’s Yeezy line. The Yeezy Foam Runner in the “Ararat” colorway debuted with a $75 retail price tag during a surprise drop in June. With comparisons to Crocs’ classic clogs, the unique silhouette became a highly anticipated shoe thanks to its never-before-seen accents and striking divergence from typical sneaker creations. Made from a harvested algae foam, the aerodynamic shoes now resell anywhere from $328 to $545 on StockX with prices starting at $372 and ranging up to $750 from GOAT.

Baldwin decided to keep things more casual with her pair of Nike sneakers. The black and white design bears resemblance to the brand’s Flex Experience Run 9 running shoes with ventilated uppers and a sculpted outsole. Similar colorways retail for $65 at Nike.com.

As for Justin Bieber, the singer can typically be found in must-have sneakers from the likes of Off-White, New Balance and Nike with a few more dressed-up silhouettes from Gucci among others — but his true footwear passion centers around the colorful rubber uppers of Crocs. The Canadian native founded his brand Drew House in early 2019 and has since expanded the business to include loungewear, apparel and hotel-style soft slippers. Aside from wearing his own pieces, they have also been spotted on his wife and stars such as Millie Bobby Brown, who can’t get enough of her Drew House footwear.

Click through the gallery to find even more of Justin Bieber’s boldest footwear moments over the years.