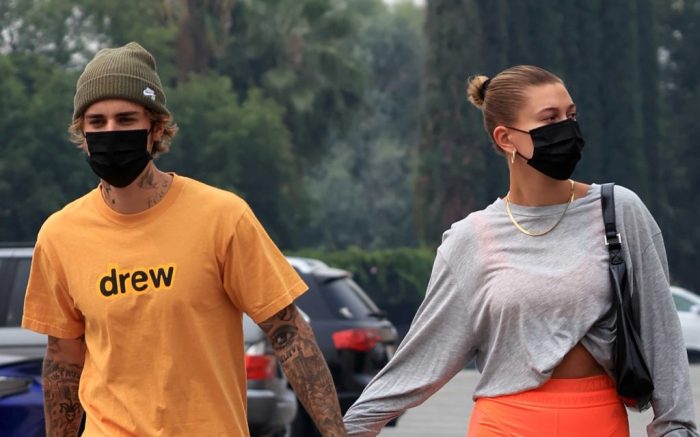 The couple, who was spotted hand in hand on Saturday, coordinated with their black face masks — but the ensembles certainly matched in more ways than one.

Going for bright hues, the Canadian singer-songwriter opted for a tangerine T-shirt from his smiley-faced clothing and shoe line, Drew House, while the model and TV personality donned salamander orange biker shorts and what appeared to be a correspondingly colored sports bra. On top of that, she layered a long-sleeved heather gray top, which paired well with her husband’s Drew-emblazoned basketball shorts.

For footwear, Bieber went for Nike sneakers — seemingly the brand’s Air Max 90 — in a monochromatic off-white color, leather tongue tags and waxed laces. (The trainers might remind sneakerheads of Tinker Hatfield’s original 1990 design.) On the other hand, Baldwin was seen in Yeezy slides in a dark colorway; however, the shoes were still in the same palette of earth tones like the rest of the rapper-turned-designer Kanye West’s designs in the collection.

Although she has been spotted in a number of athletic looks during recent outings, Baldwin’s shoe closet includes an eclectic mix: On top of her go-to Nike Air Force 1 sneakers, the celebrity has been photographed in trainers from Chanel and Off-White to the Nike x Fear of God collaborations, as well as towering heels and trendy footwear from Tabitha Simmons, Bottega Veneta and Jimmy Choo. She has also appeared in marketing campaigns for brands such as Guess, Zadig & Voltaire, Ralph Lauren and Tommy Hilfiger. What’s more, Baldwin joined forces with Ugg in 2016, when she starred in the shoemaker’s Classic Street Collection campaign that fall season.

Click through the gallery to see some of Hailey Baldwin’s top sneaker moments.