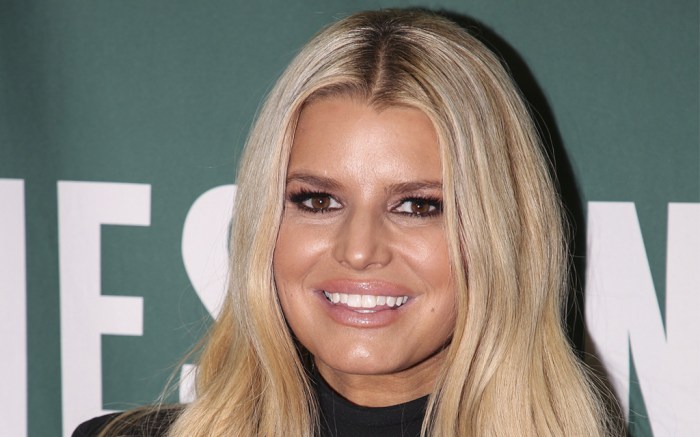 Jessica Simpson wowed in pieces from her own brand and a very special pair of boots.

The “Dukes of Hazzard” alumna posed ahead of her HSN special tonight in a $40 turtleneck sleeveless top from her eponymous collection along with a hidden pair of shorts. The almost pantless look contrasted Simpson’s choice of edgy footwear.

Tune in to @HSN tonight while my business boss/mom, @TinaSimpsonOfficial, and I go live from our @JessicaSimpsonStyle LA Showroom at 7-9pm EST/ 4-6pm PST . We will be sharing some of our favorite new Fall styles including the first pair of flat boots that I have fallen in love with since high school 😜

Described by the actress as the “first pair of flat boots that I have fallen in love with since high school footwear,” the designer’s own Kirlah boots feature a slick patent plaid pattern across a combat boot-inspired silhouette. Held together with three adjustable straps, the mid-calf pair includes three rhinestone-adorned buckles for a glam touch. With an on-trend lug-sole base, the sleek boots retail for $149 at Nordstrom.com.

Known for her own fashion, Simpson launched her shoe line in 2005 in partnership with the late Vince Camuto. The Jessica Simpson Collection is currently owned by Sequential Brands Group, and it offers a range of affordable styles, including shoes as well as clothing and accessories for women and children. Simpson has additionally won big at FN’s annual Achievement Awards, taking home Launch of the Year in 2005.

Just yesterday, she showed off another new pair from her label in a set of 5-inch platform floral boots. The Irella design takes inspiration from lace-up combat boots with its utilitarian base, transforming the style with textured faux leather uppers and nail-head studs across the platform toe; the Jessica Simpson Irella boots retail for $170 and can be found at Amazon.com.

Oh how I love you!!! When I was in my mommy’s belly God formed me and placed you in my heart. It took me 29yrs to discover my soulmate and colliding with your heart was our spiritual  destiny. You are the human that all should aspire to be. A force of transformative inspiration to all that know and love you and are lucky enough to have you love them back. I am so excited to see all that you have been working on so beautifully to be introduced into the world this year! Everyone get ready to be enlightened by my legendary spiritual guru… @legendarydisciplines 🙌🏼💚🥳 Thank God ERIC JOHNSON was born this day 41yrs ago! Happy Birthday hubba hubba hubby of mine!!!

When she’s not clad in footwear from her eponymous brand, Simpson can often be found in soaring styles from the likes of Saint Laurent, Jimmy Choo and Stuart Weitzman. The mom of three has also selected in recent months selected multiple pairs of snake-print knee-high boots from Villa Rogue, as well as Gucci combat boots and Fendi sandals.

Flip through the gallery to find more of Jessica Simpson’s chicest footwear moments over the years.