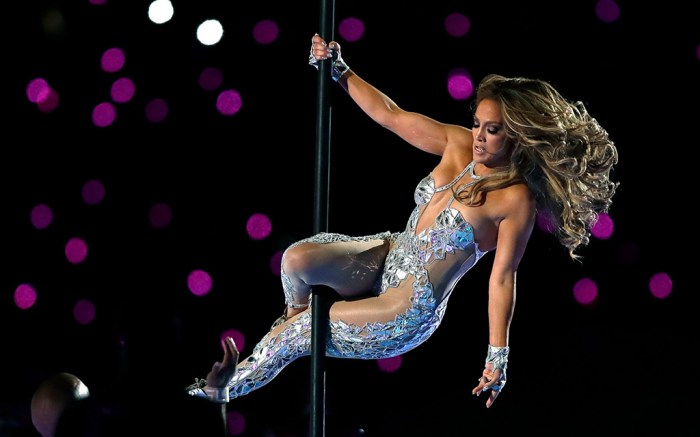 Jennifer Lopez brought down the house tonight at Hard Rock Stadium in Miami wearing a series of Versace ensembles.

For the Super Bowl Halftime Show, the 50-year-old singer kicked things off in a leather bodysuit designed to resemble a moto jacket. On her feet, Lopez wore black boots with silver heels. The whole outfit was covered in glistening Swarovski crystals, with a gold-tone Medusa accent.

Lopez them changed into a second ensemble, a sheer catsuit with glistening silver accents resembling a mosaic. The “Hustlers” star channeled Ramona, her stripper character in the film, as she climbed a pole wearing a pair of stiletto-heeled ankle boots — proof positive that she did her own stunts in the movie.

To perform her song “Let’s Get Loud” and Bruce Springsteen’s “Born in the U.S.A.,” Lopez brought out her 11-year-old daughter, Emme.

The game itself is being played between the San Francisco 49ers and Kansas City Chiefs. Going into halftime, the score was tied at 10-10. The Chiefs were the slight favorite in tonight’s action.