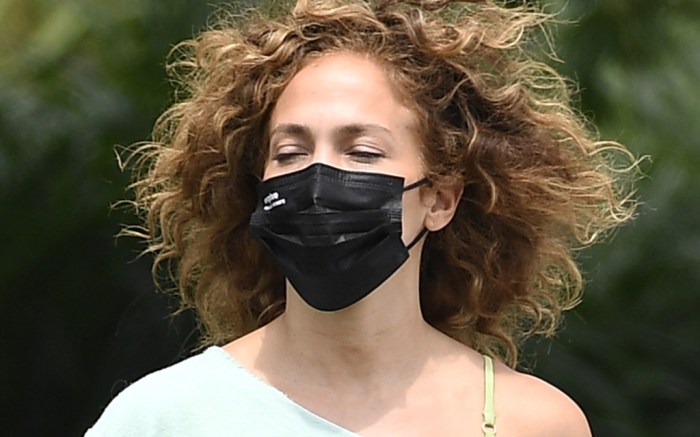 The temperature may have been in the 90s today in New York, but Jennifer Lopez nonetheless opted for a covered-up look as she went on a morning stroll in the Hamptons this morning.

The 50-year-old multihyphenate stepped out in Water Mill, N.Y. wearing a cropped mint green off-the-shoulder sweatshirt with ripped detailing, which she layered over a neon green spaghetti strap tank top. On the bottom, J-Lo sported iridescent leggings. She kept safe in an all-black face mask from Evolve Together (a seven-pack sells for $8.75 on the brand’s site).

For footwear, Lopez went with Last’s Sprint sneaker, which features a super chunky outsole, a white, mixed-material upper and two-tone laces. While the shoes sold for $250 initially, they have been marked down on Shopbop.com, where they’re now available to shop for $100 in very limited remaining sizes.

This isn’t the first time J-Lo has been spotted in her Last Sprint kicks. Over July 4 weekend, she went for a bike ride in the Hamptons while in the sneakers, pairing them with denim cutoffs and a Guess one-piece bathing suit.

Other favorite sneakers of the star’s include the Adidas Edge Lux 3 as well as the Nike Air Presto. The “On the Floor” singer also has her own shoe line, JLo Jennifer Lopez, which sells an array of styles ranging from platform heels to strappy lace-up sandals. The line is available to shop exclusively at DSW.com and in the retailer’s stores. When it comes to apparel, the A-lister can often be found in designer duds from labels such as Dolce & Gabbana, Gucci and Valentino.

In addition to having her own footwear label, J-Lo was one of the most coveted campaign stars of the spring ’20 season, appearing in Versace’s ad campaign (wearing “the” dress) and in advertising for Guess. What’s more, she made her campaign debut for Coach, promoting the new CitySole sneaker after being appointed as a global ambassador for the American heritage label in 2019.

While J-Lo’s sneakers are pretty much sold out, we’ve rounded up some styles below that you can shop now to get a similar look.

Click through the gallery to see all of Jennifer Lopez’s stylish Met Gala looks through the years.