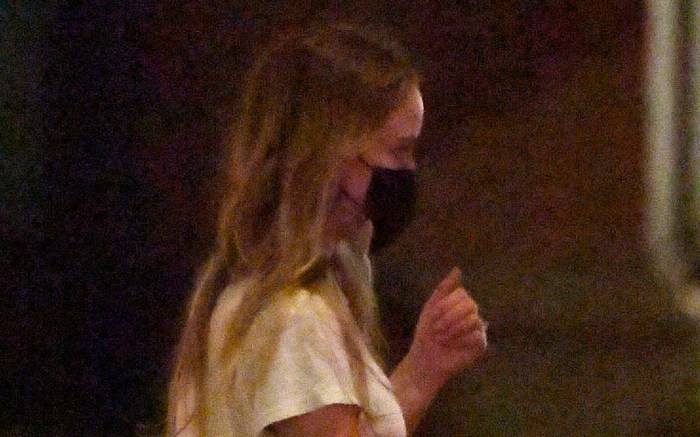 Spotted heading out of their New York apartment, the couple ventured out for a bite to eat in style. Lawrence opted for a casual white t-shirt layered over striped black and white cigarette pants. She accented the look with an oversize tote bag as well as a crossbody purse and protective face mask.

On her feet, the “Hunger Games” star continued the color scheme of her look with a set of white low-top sneakers. The relaxed pair included a contrasting split outsole, a black heel counter and a striped decoration on the tongue. The logo on the tongue resembles that of Christian Dior with its signature brown and black emblem; the silhouette from the brand is known as its Travel Sneaker and retails in multiple colorways for $790 at Dior.com.

As for her husband Cooke Maroney, the New York art gallerist followed suit in similar subdued tones, matching a graphic T-shirt to a bomber jacket and slouchy jeans. His footwear of choice came from Vans in a black and white take on the brand’s Sk8-Hi sneakers.

Just last week, the couple made another rare outing as they walked hand in hand across the city. Taking advantage of the warm weather, the “SIlver Linings Playbook” actress decided on a bright green printed sundress for the occasion paired with the same set of Dior sneakers.

The actress serves as a Dior ambassador, starring in a series of campaigns for the French fashion house and oftentimes sporting sleek footwear and apparel from the brand both on and off the red carpet. When it isn’t Dior, the American star can be found in pieces from Bottega Veneta, Rosie Assoulin, Chloe Gosselin and more top names.

Flip through the gallery to see more of Jennifer Lawrence’s best style moments over the years.