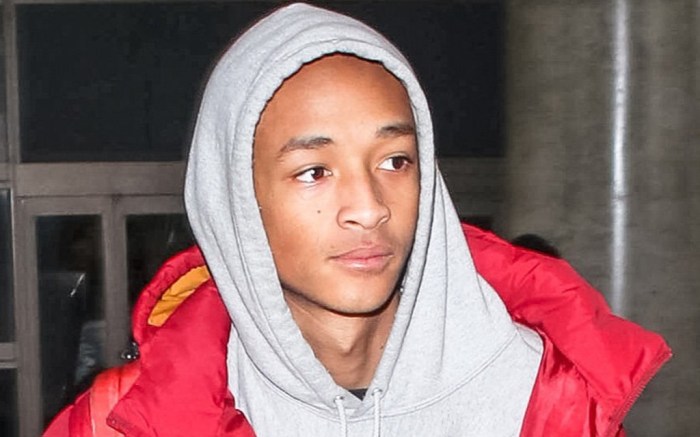 Jaden Smith twinned with girlfriend Odessa Adlon in jeans and sneakers as the duo headed for date night at Nobu in Malibu, Calif. on Sunday.

Smith showed off his signature bold style in a red and blue tie-dye hoodie, worn with pale blue straight-leg jeans.

On his feet, the “Watch Me” performer sported reflective New Balance sneakers, an unsurprising choice, given that he works with the brand. He accessorized with a gold watch and wore his hood pulled over his head. While Smith was not clad in a face covering, he appeared to be holding an all-white mask in his hand. Meanwhile, Adlon sported a gray Mickey Mouse crewneck sweatshirt teamed with high-waisted light-wash mom jeans. The actress anchored her look with all-white Nike sneakers and accessorized with a printed face mask.

A New Balance ambassador since June 2019, Smith will drop his first collaborative shoe with the label, the Vision Racer, on July 17. The vegan-friendly silhouette has an ultra-chunky sole, with an oversize heel tab and a faux leather upper. It will retail for $150 on Newbalance.com and in select retail stores.

“Shared values of transforming the status quo; staying true to oneself; giving back to community; and, respecting heritage while co-authoring a distinct future, are the foundation of the relationship between New Balance and Jaden Smith,” said New Balance chief marketing officer and SVP of merchandising Chris Davis in a release.

In addition to his work with New Balance, Smith has landed several other high-profile deals in the fashion and footwear space. The “On My Own” entertainer appeared as part of the star-studded cast for Louis Vuitton’s pre-fall ’19 campaign. Further, his eco-friendly company, Just (maker of Just Water) teamed up in September 2019 with Allbirds, the sustainably minded sneaker startup. Smith was also tapped by Levi’s to star in its latest ad campaign, appearing alongside longtime pal Hailey Baldwin. What’s more, the A-lister’s apparel company, MSFTSrep, partnered with Stance in August 2019, debuting its “Trippy Summer” collection at a pop-up shop in Los Angeles.

Get a similar look to Smith’s below.