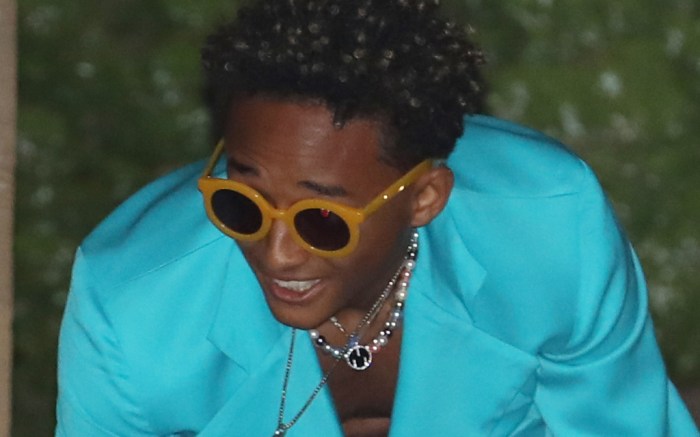 Jaden Smith is continuing his streak of gender-neutral dressing.

The 22-year-old rapper was out for dinner last night at Nobu in Malibu, Calif. alongside sister Willow Smith and friends. He opted for an eye-catching look in a bold teal pantsuit, teamed with a Polite Worldwide pearl necklace, a rainbow-striped pendant and a silver chain bracelet, along with a Coachella wristband and two rings.

On his feet, the “Watch Me” entertainer sported reflective New Balance sneakers, an unsurprising choice, given that he works with the brand. The white sneakers featured a chunky sole and a lace-up silhouette. Smith added some color to his feet with a pair of pastel yellow, pink and purple tie-dye crew socks.

The “Karate Kid” alum appeared to be wearing the same sneakers he selected on Sunday for a date night at Nobu with his girlfriend, Odessa Adlon. That day, he opted for a more casual ensemble, selecting straight-leg, light-wash jeans as well as a red and blue tie-dye hooded sweatshirt.

A New Balance ambassador since June 2019, Smith will soon drop his first collaborative shoe with the label, the Vision Racer. The vegan-friendly silhouette has a chunky sole, along with an oversize heel tab and a faux leather upper The style comes in a bold color palette of baby blue with a hot pink “Vision” on the underfoot visible through a rubber outsole with translucent leaves. It will be available for $150 on Newbalance.com and in select retail stores beginning on July 21.

In addition to his work with New Balance, Smith has landed several other high-profile deals in the fashion and footwear space. The “On My Own” performer appeared as part of the star-studded cast for Louis Vuitton’s pre-fall ’19 campaign alongside Emma Roberts, Sophie Turner and more celebs. Smith was also tapped by Levi’s to star in its latest ad campaign, appearing alongside longtime pal Hailey Baldwin. What’s more, the “After Earth” star’s apparel company, MSFTSrep, partnered with Stance in August 2019, debuting its “Trippy Summer” collection at a pop-up shop in Los Angeles. Further, his eco-friendly company, Just (maker of Just Water) debuted a sneaker collaboration with with fellow sustainably minded label Allbirds in September 2019.