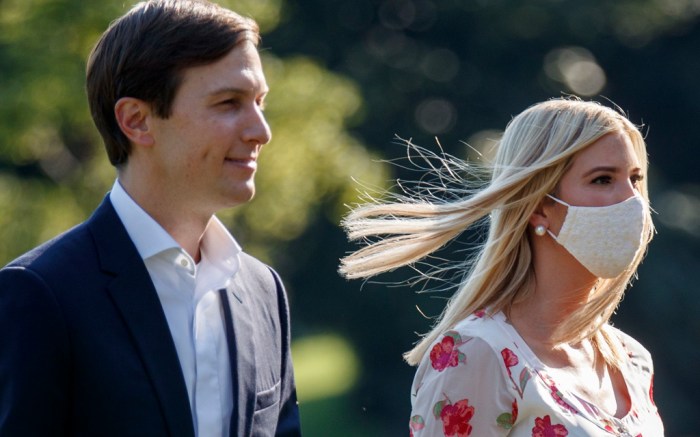 Ivanka Trump officially cast her ballot this week alongside her husband Jared Kushner.

The advisor to the president joined her husband and her father, President Donald Trump, aboard Air Force 1 yesterday as seen on her Instagram page. As she held tight to her absentee ballot, the first daughter modeled a blue peplum zip-front jacket teamed with a coordinating pencil skirt.

On her latest stop on the campaign trail, Ivanka Trump made her way down to Naples, Fl. yesterday to meet with potential voters and to speak with chairwomen for the Republican party.

During her busy day, the advisor to the president made sure to wear an attention-grabbing number and did so in the form of a pink power suit, cinched together with a soft red statement bow for a bold touch.

While her shoes couldn’t be seen behind the podium earlier in the week or on Air Force 1, it is only to be expected that the first daughter wore one of her go-to heeled silhouettes such as Jimmy Choo pumps of Gianvito Rossi strappy sandals.

Throughout her time on the campaign trail for her father, President Donald Trump, Ivanka has continued to debut more and more designer pieces and designer footwear. When it comes to shoes, the former footwear head herself oftentimes prefers pumps from brands like Gianvito Rossi of course along with Jimmy Choo and Burberry; she teams the heels to designs from the likes of Brandon Maxwell and Altuzarra.

She also has stepped out in more affordable picks from Rothy’s flats and Gola for J.Crew sneakers.  When it comes to fashion and apparel, Ivanka typically favors major labels like Chanel, Dolce & Gabbana and Oscar de la Renta. She includes a few more wallet-friend picks in her rotation such as Kenneth Cole and Tommy Hilfiger x Zendaya, too.

Click through the gallery to see more of Ivanka Trump’s top footwear moments over the years.