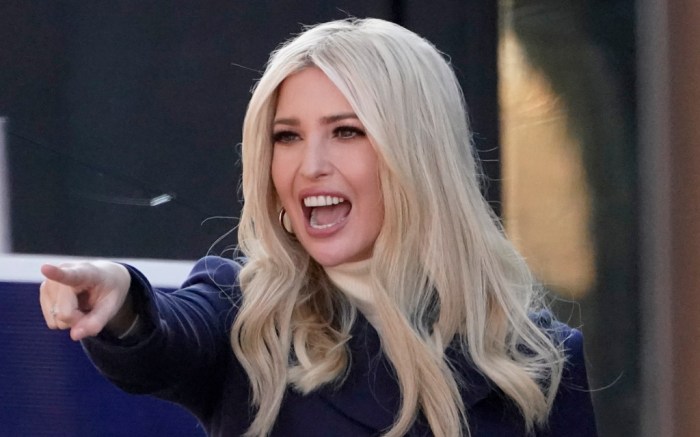 Ivanka Trump headed down to Georgia today to campaign for Republican Georgia Senators Kelly Loeffler and David Perdue ahead of the upcoming runoff election in January.

The advisor to the president arrived in Milton, Ga., outside of Atlanta this afternoon to speak to crowds at a campaign event. For the occasion, Ivanka layered a white turtleneck sweater under a navy double-breasted peacoat complete with metallic gold buttons.

Over the weekend, Ivanka Trump took to Instagram to share a commemorative afternoon with her husband, Jared Kushner, and their three kids, Arabella Kushner, 9, Joseph Kushner, 7, and Theodore Kushner, 4, at the White House.

The family placed their handprints and footprints in the Children’s Garden and dressed in formal attire for the event. Ivanka herself opted for a scoop-neck checkered midi dress complete with suede pointed-toe pumps; the now sold-out mixed plaid design comes from Rosie Assoulin and once retailed for $1,895 at Saks.

“The Children’s Garden was a gift from President and Mrs. Johnson to the White House in 1968. The garden features a goldfish pond, an apple tree, tulips and grape hyacinth,” explained Ivanka in her post. “Footprints and handprints of Presidents’ children and grandchildren are embedded in the garden’s paved pathway. 10 more bronze pavers were added by @FLOTUS, handprints of each of President Trump’s grandchildren.”

Though her shoes couldn’t be seen at today’s event., the former footwear head herself oftentimes prefers pumps for her more formal occasions; her go-to picks come from brands like Gianvito Rossi along with Jimmy Choo and Burberry.

Beyond her cold weather-ready attire, the first daughter also has stepped out in more affordable picks from Rothy’s flats and Gola for J.Crew sneakers. As for fashion and apparel, Ivanka Trump herself also typically favors major labels like Chanel, Dolce & Gabbana and Oscar de la Renta; she also teams her go-to heels to designs from the likes of Brandon Maxwell and Altuzarra.

Click through the gallery to look back at more of Ivanka Trump’s footwear looks from past years.