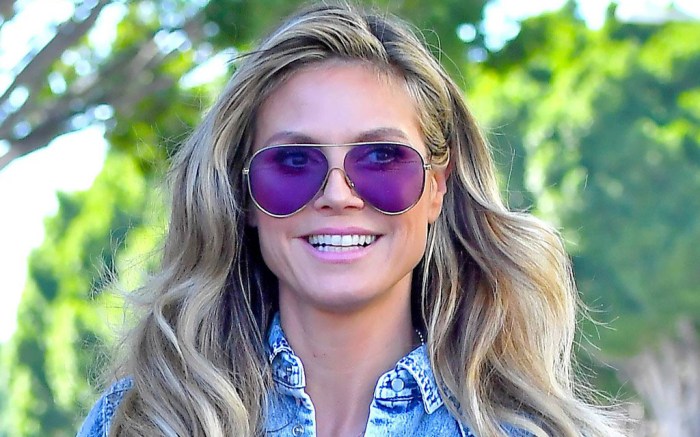 Heidi Klum transformed a double denim look with a touch of her own standout style this week on the set of “Germany’s Next Topmodel.”

Daring to layer jean on jean, the competition series’ host opted for a blue mesh top teamed with a coordinating jacket and pants courtesy of Balenciaga; both pieces are currently on sale at Net-a-Porter with the floral-print jeans down to $375 from $750 and the matching denim jacket retailing for $1,050 instead of $1,750.

Klum’s denim-on-denim style is considered a Canadian Tuxedo in the fashion realm; the legend of the look originated in the 1950s when American musician Bing Crosby chose an all-jean Levi’s outfit instead of a suit at his hotel in Vancouver. Levi’s then coined the term along with a custom denim tuxedo for Crosby, according to the CR Fashion Book.

To top off her standout look, the model opted for a set of sleek white booties with a sharply pointed toe and a lifted stiletto heel. White booties provide an effortlessly chic touch to any ensemble with a brightening effect when compared to darker colorways.

The white heels are a staple in Klum’s closet come fall and winter. Earlier this week, for example, she matched the shoes to a $295 leather boilersuit from The Frankie Shop (available at TheFrankieShop.com) on the set of her modeling competition show.

As the seasons start to turn, make sure you stock up on chic white boots just like Heidi Klum’s pair with these chic picks.

Click through the gallery to have a peek at more of Heidi Klum’s standout styles over the years.