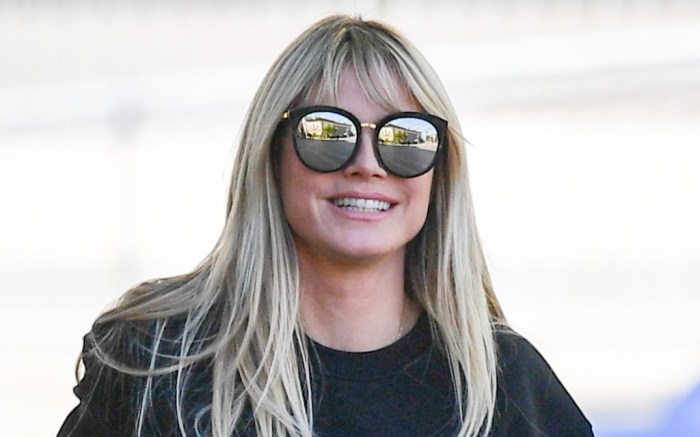 For her latest on-set look for “Germany’s Next Topmodel,” Heidi Klum decided to give fall’s biggest footwear a daring upgrade.

The former model herself paused to show off her camera-ready ensemble on the series’ set in Berlin earlier today, including the coziest oversize hoodie. The zip-up design comes from one of Klum’s favorite labels, Moschino; with a soft cotton fabric and a cuffed finish, the sweatshirt retails for $1,130 on the brand’s website.

To balance out the cropped hem of her top, Klum made sure to cover up in a set of the wildest lace-up boots. The design also comes from Moschino and takes inspiration from classic work boot silhouettes. Hitting about mid-thigh, the lifted pair features a lug-sole finish as well as a 5-inch Louis wood heel with suede uppers. Though the thigh-high iteration isn’t currently available, a shortened version of the Moschino Combat Trekking boots retail for $1,075 at Farfetch.com.

Combat boots, work boots and hiking-inspired styles are the new norm amongst celebrity style trends, experiencing a revitalization along with a dew other silhouettes from the 1990s. From brands like Prada, Bottega Veneta and, of course, Dr. Martens, these lug-sole boots offer ease of wear with a grungy-chic appeal. This season, you’ll spot utilitarian boots on the likes of Kylie Jenner, J-Lo, Gwen Stefani and more major stars.

Click through the gallery to discover more of Heidi Klum’s wildest looks throughout the years.