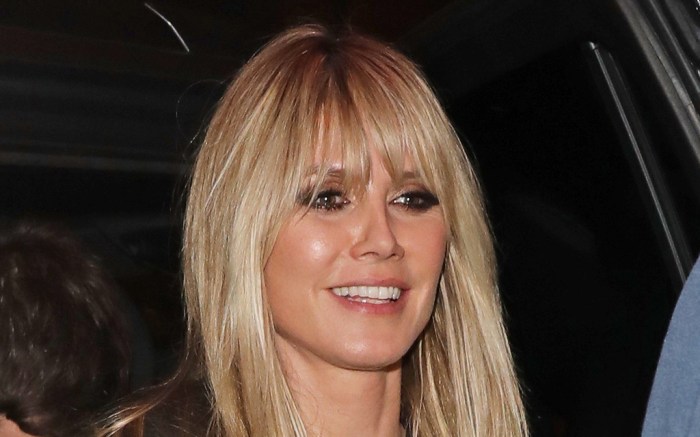 Heidi Klum proved in her latest on-set attire that a classic print can be more versatile than you think.

The host of “Germany’s Next Topmodel” showed off a behind-the-scenes look at her most recent look for the show, tapping Monse for her standout attire. Opting for a two-piece set, her tartan yellow sweater comes with a $990 price tag while her matching checkered skirt sells for $1,090 at Monse.com. To keep warm, klum also layered on a zip-up shearling leather jacket for an edgy touch.

As for footwear, the model herself threw in another edgy angle to her outfit with leather lace-up boots. The wild thigh-high pair featured combat boot-inspired detailing with metallic adornments and a sturdy block heel base.

Combat boots and hiking-inspired styles are the new norm amongst celebrity style trends, experiencing a revitalization along with a dew other silhouettes from the 1990s. From brands like Prada along with Bottega Veneta and Dr. Martens, these lug-sole boots offer ease of wear with a grungy-chic appeal. This season, you’ll spot utilitarian boots on the likes of Kylie Jenner, J-Lo, Gwen Stefani and more major stars.

Throughout this winter, Heidi Klum has been returning to the set of the German competition series as they practice social distancing precautions to film the newest season. For the show, the media personality has picked wow-worthy looks from the likes of Mugler, Marina Hoermanseder, Philosophy, Moschino, Carolina Herrera and Maison Margiela to name just a few.

Flip through the gallery to check out more of Heidi Klum’s boldest red carpet moments throughout the years.