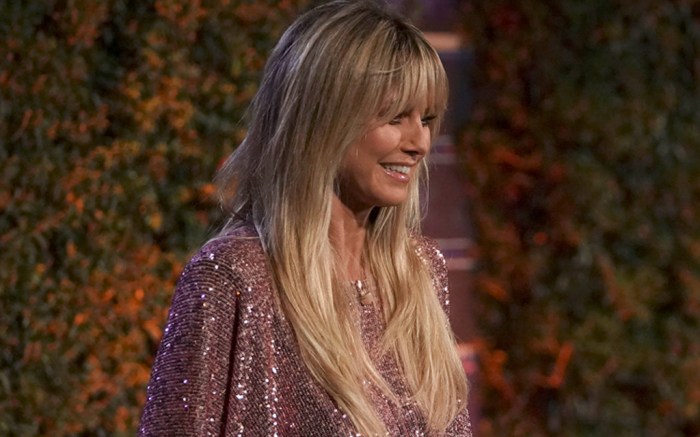 The model stepped onto set wearing a sequin-coated dusty rose-colored dress courtesy of Redemption; the bat-sleeve, draped design features a lightweight chiffon base covered in glittering detailing and a lifted hem. You can find the style for $1,639 at Farfetch.com.

As for footwear, the former “Project Runway” star elongated her form with a pair of black, barely-there heeled sandals; the design creates the illusion of longer length with its lack of an ankle strap, letting the legs look miles long without cutting them off abruptly. The style stayed put thanks to a securing thing strap across the toe.

Klum’s style on the NBC talent series can be described as bigger and bolder than ever. Just last week, she decided on head-to-toe animal prints in a suit from Mugler. The tailored two-piece design flowed right into similarly-printed sandals, set atop a round toe and tall stiletto heel. The German native even styled her hair in a dramatic, lion’s mane-inspired look to bring the outfit together.

In addition to her role on NBC’s talent competition, Klum finished her bout serving as the co-host of Amazon Prime’s series “Making the Cut” alongside her former “Project Runway” co-star Tim Gunn; the competition series profiled up and coming designers with winning styles added to shop live every week to Amazon. She also currently serves as the host of “Germany’s Next Topmodel.”

Ahead, find sandals inspired by Heidi Klum that will help elevate your style.

Flip through the gallery to discover more of Heidi Klum’s best and boldest looks over the years.