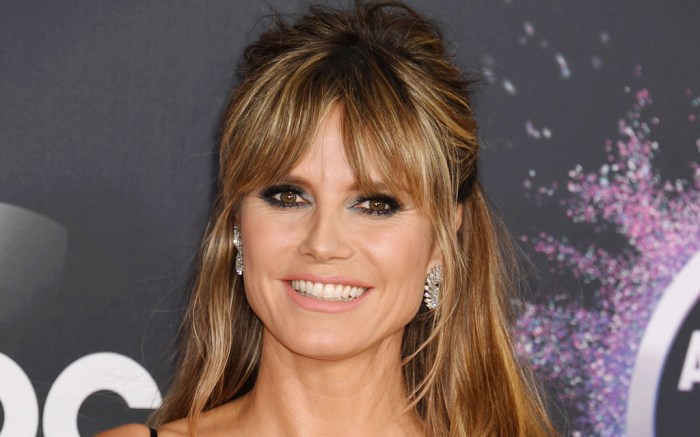 Another day, another major fashion moment from Heidi Klum on the set of “Germany’s Next Topmodel.”

On Tuesday, the former “Project Runway” host shared an Instagram photo of herself on the set of the reality competition series, wearing a white Maison Margiela punched holes blouse that retails for $502, and is available on Cettire.com. It appears as though Klum wore a black corset underneath the bold button up.

She pulled the look together with a black silk Carolina Herrera skirt that features an oversized bow at the hip, which cascaded down to the model’s knee. The miniskirt retails for $1,690 a Net-a-Porter.

On her feet, Klum gave the look a vibrant pop of color, wearing a pair of red Christian Louboutin pointed toe pumps.

As of lately, Klum has been a fan of the sultry hue as she sported a cherry red jumpsuit on the set of “Germany’s Next Topmodel” on Monday. The Philosophy look, which retails for $1,295 at Net-a-Porter, featured a robe-inspired design and belt.

Klum paired the jumpsuit with coordinating red heels. Titled the Show Off, the heels are from European brand Hardot. The nail pinned style retails for around $490, and can be found online at Hardot.com.

Make a bold statement of your own with these red pumps inspired by Heidi Klum’s look.