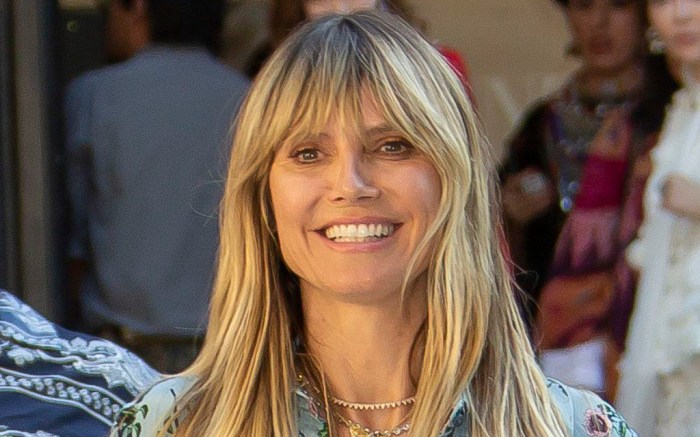 Her strappy sandals featured a rounded open toe with a soaring heel, similar in style to Vince Camuto’s Ashta sandals.

The model accented her outfit with several large gold rings, a gold choker and a fresh gold manicure. She wore her blond locks loose in wild curls, done by hair stylist Lorenzo Martin.

“We are ready @agt ❤” she captioned one of her Instagram photos.

In one of the several posts, Klum struts around and dances in her outfit revealing a black bralette underneath her animal print blazer, before blowing a kiss at the camera.

This bold printed look is quite different from what Klum typically wears for hosting “AGT.” Her previous outfit included a pink peek-a-boo top with cutout details paired with a black midi skirt. Her footwear choice, however, was of a similar style, as she sported a pair of strappy black high-heeled sandals.

I hope all of you had fun watching @agt 🤗❤️

While Klum is known most recently for her role on NBC’s talent competition, she’s previously served as a co-host to the Amazon Prime series “Making the Cut” alongside her former “Project Runway” co-star Tim Gunn: the competition series profiled up and coming designers with winning styles added to shop live every week to Amazon. She also currently serves as the host of “Germany’s Next Topmodel.”