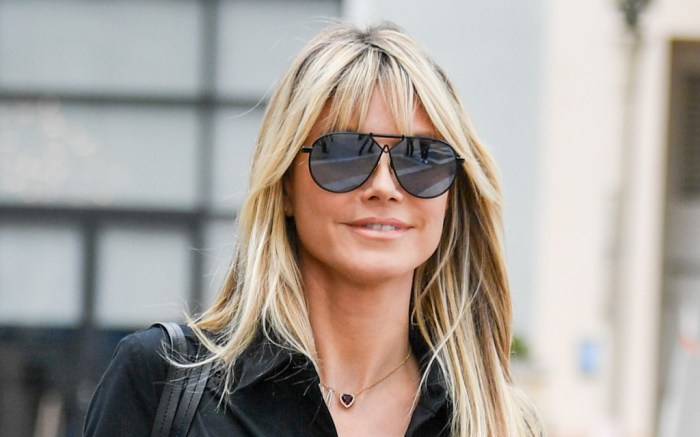 Heidi Klum channeled her edgy side this week on the set of “Germany’s Next Topmodel.”

The German native herself, who serves as the show’s host, strapped up a set of peek-a-boo leather pants from another German powerhouse, Marina Hoermanseder. Matched to a coordinating leather blouse from the label, Klum’s designer pants included buckled detailing across the leg with added zippers and embellishments for a standout look. While the bottoms aren’t currently available, a denim take on the pant retails for over $550 on the brand’s website.

As for footwear, Klum continued the standout look with her choice of gold strappy sandals. The cage-style pair featured bright red lining under metallic uppers and a pointed-toe front, all atop a steep rounded heel.

Throughout November, the former model herself has been returning to the set of the German competition series as they practice social distancing precautions to film the newest season. For the show, the media personality has picked wow-worthy looks from the likes of Mugler, Philosophy, Carolina Herrera and Maison Margielaa to name a few.

Dress up your ensembles with an edgy yet glam touch in these next gold heels inspired by Heidi Klum.

Click through the gallery to discover even more of Heidi Klum’s boldest statement looks over the years.