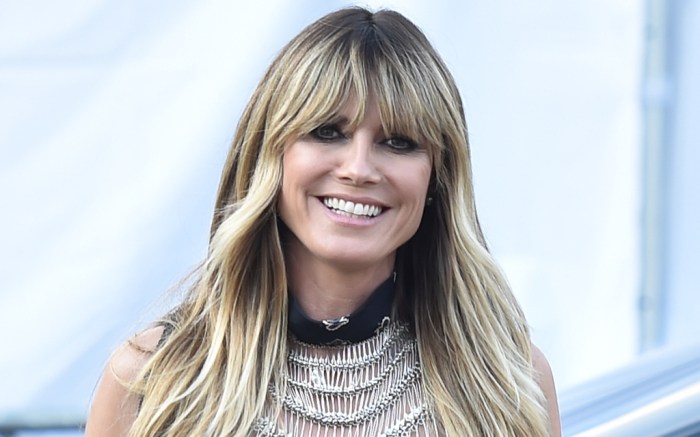 Heidi Klum looked like a walking piece of art while on the set of “Germany’s Next Topmodel.”

On Thursday, Klum, who is the host of the competition series, shared two Instagram posts that show her wearing an abstract-print faux fur coat from the brand Kirin. The outerwear piece, which features the colors red, pink, yellow, green and black in a painting-like pattern, retails for $1,467 on Farfetch.com.

Underneath the coat, Klum wore a multi-colored cardigan and a pink sweater with black pants.

On her feet, Klum opted for a grunge look with a pair of pull-on chunky black boots with a rounded toe. The footwear also featured a flat rubber sole and what appears to be a nylon pull tab.

Klum has showcased a number of eye-catching looks while filming the next season “Germany’s Next Topmodel” this month.

On Tuesday, Klum stole the show in an outfit that included coordinating pieces courtesy of Moschino. For her apparel, it was a $1,255 cotton and viscose dress in the brand Animé Toile du Jouy print available on the brand’s website.

Klum continued the bold print with her footwear, opting for Moschino’s over-the-knee boots. Coated in the two-tone pattern, the thigh-skimming pair features a unique lace-up front set with a cone flare heel. While Klum’s two-tone version of the boots isn’t currently available, an all-black satin iteration retails for $1,925 at Moschino.com.

Other wow-worthy moments from Klum while on set include looks courtesy of Mugler, Marina Hoermanseder, Philosophy, Carolina Herrera and Maison Margiela.

Shop similar boots as Heidi Klum with these picks below.