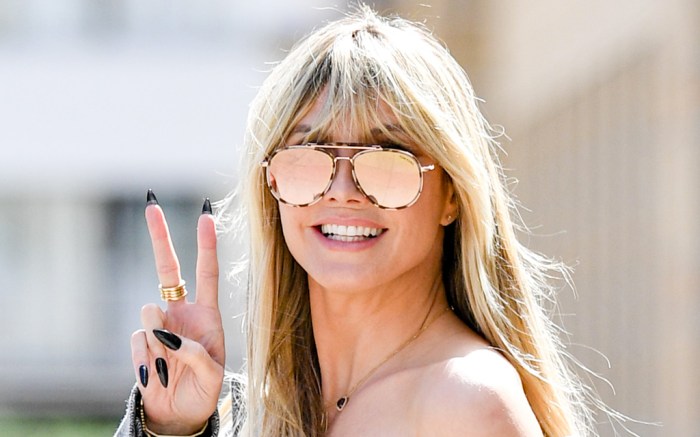 Heidi Klum may be the first star to get her hands on this must-have jumpsuit from a rising designer.

The style actually comes from Klum’s Amazon Prime Video series “Making the Cut” and was a winning design from episode seven courtesy of Jonny Cota. The jumpsuit from Cota, who went on to win the series finale in April, differentiates from the pack with a drop crotch silhouette, tie-waist, zip-front and oversize pockets.

The long-sleeve blue printed design once retailed for $90 at Amazon.com from the series’ online store, but is currently sold out.

Klum added to the look with a set of lace-up sock-style sneakers by Balenciaga. Its Speed trainers utilize knit uppers to create a foot-hugging feel with a lifted chunky sole finished with the brand’s name across the almond toe. Similar colorways to Klum’s pick retail for $770 at Farfetch.com.

On the runway during “Making the Cut,” the jumpsuit was styled with all-white sneakers as the designer left the pants uncuffed. The series debuted on March 27 with a feel reminiscent of “Project Runway” partially thanks to the reunion of Klum with her former costar Tim Gunn. Cota took home the grand prize of $1 million to kickstart his brand along with a selection of his prize-winning designs available now on Amazon.com.

Cota was among 12 fashion designers whose styles from weekly challenges were sold after each episode directly on the e-com giant. Cota himself a 35-year-old self-taught owner of streetwear brand Skingraft. With over 43,500 followers on Instagram, Cota creates biannual men’s and women’s ready-to-wear collections and has already presented during New York Fashion Week five times. Before coming to the series, the Los Angeles-based designer dressed Beyoncé, Nicki Minaj and more stars.

Before her own TV stardom, Heidi Klum’s career kicked off modeling for the likes of Jordache, Victoria’s Secret and Sports Illustrated as well as founded her own swimwear and intimates lines. In her shoe closet, you can find everything from Christian Louboutin pumps to thigh-high zip-front boots from Moika Chiang to wild fish-style rubber slippers.

Click through the gallery to find more of Heidi Klum’s most wow-worthy style moments.