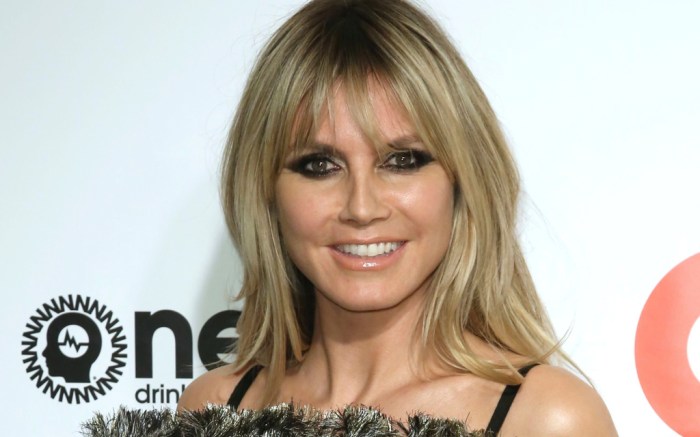 Heidi Klum may be in quarantine, but she’s still got new episodes of television coming out.

The Victoria’s Secret Fashion Show alum took to her Instagram page today to share a teaser for the latest episode of “Germany’s Next Top Model,” which she hosts. In the post, Klum looks fierce in a glistening gold fringed gown, which features leg-baring slits at the sides to reveal black underwear underneath.

The supermodel paired the leggy gown with black thigh-high boots, which boasted a pointed toe, stiletto heel and suedelike upper. She accessorized with a black hat and matching gloves and wore her blond hair down and flowing.

In addition to appearing on “GNTM,” Klum also hosts “Making the Cut” on Amazon Prime Video. The finale of the 10-episode series, which premiered in late March, aired last week. In the series, Klum and Tim Gunn put 12 designers through a series of challenges, which are judged by Klum as well as Nicole Richie, Naomi Campbell, Chiara Ferragni, Joseph Altuzarra and Carine Roitfeld. Each week’s winner sees their ensemble put on Amazon.com immediately after the show. The winner of the series received $1 million and a mentorship, with their full collection now available to shop from Amazon.

While fans of both “GNTM” and “Making the Cut” are used to seeing Klum all glammed up, the star unsurprisingly opts for more dressed-down wares when she’s off-duty. She has stepped out in casual footwear such as Birkenstock sandals, Chanel sneakers and Chloe ankle boots.