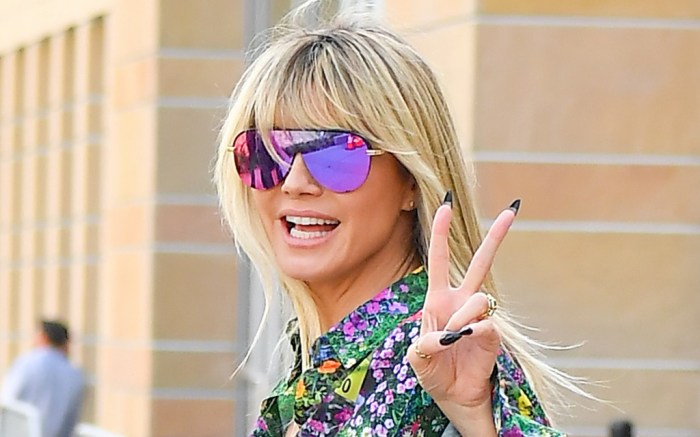 On the set of “Germany’s Next Topmodel,” Heidi Klum continues to steal the show.

The competition series’ host is serving up the boldest and chicest on-set style this month as the film the next season, taking to Instagram to show off her daily ensembles. On Tuesday, Klum’s outfit of the day included coordinating pieces courtesy of Moschino. For her apparel, it was a $1,255 cotton and viscose dress in the brand Animé Toile du Jouy print available on the brand’s website.

The standout print continued into Klum’s choice footwear, Moschino’s over-the-knee boots. Coated in the two-tone pattern, the thigh-skimming pair features a unique lace-up front set with a cone flare heel and a double platform toe measuring in total around 5 to 6 inches in height. While Klum’s two-tone version of the boots isn’t currently available, an all-black satin iteration retails for $1,925 at Moschino.com.

Throughout November, the former model herself has been returning to the set of the German competition series as they practice social distancing precautions to film the newest season. For the show, the media personality has picked wow-worthy looks from the likes of Mugler, Marina Hoermanseder, Philosophy, Carolina Herrera and Maison Margiela to name just a few.

Elevate your style in these fun and printed boots inspired by Heidi Klum’s look.

Click through the gallery to discover more of Heidi Klum’s biggest and boldest looks throughout her career.