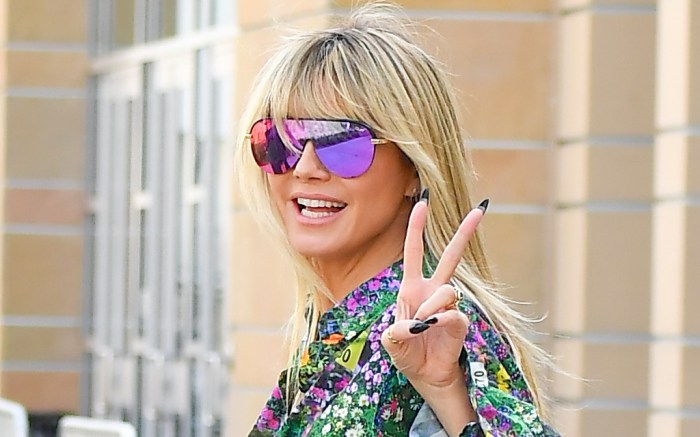 Heidi Klum joined an unexpected guest on the set of “America’s Got Talent” this week.

Shared on TikTok last night, YouTube star David Dobrik made his way backstage to join Klum and her fellow series judge Howie Mandel for a twist on a trending dance. Together, the trio donned tree-style costumes with realistic leaves and decor to tout. In a second video posted to the media sharing platform, Klum herself proved that she can still make anything look fashionable as she tucked a neon zebra stripe tank top into the pants and matched them to bright yellow sandals.

The former “Project Runway” host then demonstrated her famous catwalk skills as Dobrik exclaimed, “Guys, Heidi is one of the hottest bushes in the world… it’s crazy because you genuinely look really good in it.”

He then captioned the post of the short clip: “Only she could make being dressed like a tree look good.”

While tree costumes aren’t always in her style rotation, Heidi Klum has earned herself an impressive reputation for bold and out there looks. From her wild Halloween costumes to her standout looks on set, more is always more when it comes to the former model.

Just yesterday, before her costume switch, Klum exemplified her unique taste in a cow-inspired printed set from Maison Valentino. She then teamed the black and white look to sleek pointed-toe mules with her go-to anklet in tow.

On top of her role on NBC’s talent competition, Klum finished her bout serving as the co-host of Amazon Prime’s series “Making the Cut” this year alongside her former “Project Runway” co-star Tim Gunn; the competition series profiled up and coming designers with winning styles added to shop live every week to Amazon. She also currently serves as the host of “Germany’s Next Topmodel.”

Check out the gallery to see more of Heidi Klum’s boldest looks over the years.