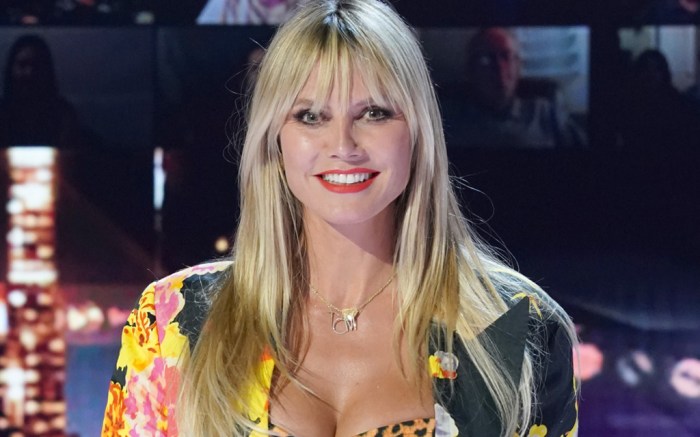 Heidi Klum opted for a look that would pop off the screens for this week’s episode of “America’s Got Talent.”

The series judge layered bold on bold patterns in a cheetah-print bralette teamed with a multicolored floral blazer and pant set; the suit included hits of bright yellow and pink, all displayed across super high-rise bottoms and a tailored jacket.

Before the episode aired, Klum gave fans a full preview of the look including a glimpse at her strappy sandals. The black stiletto pair featured smooth uppers with a securing ankle strap up top, as seen in her videos on Instagram.

We are getting closer to Showtime 😛 I am so excited to see all the amazing @agt acts. Wishing everyone a great show !!!!!! ❤️ Good Luck 👍🍀

The model returned to the NBC series’ set earlier this week to record more parts for the show in a voluminous combination courtesy of Zimmerman; the ensemble matched a white jacquard jumpsuit with a coordinating fringe-hemmed overcoat. On her feet, Klum selected a set of chicly-heeled white pointed-toe booties, an ideal shoe for the transition between summer and fall.

Back to work ❤️ LOVE my Job 👗 @zimmermann

Nowadays, in addition to her role on NBC’s talent competition, Klum finished her bout serving as the co-host of Amazon Prime’s series “Making the Cut” alongside her former “Project Runway” co-star Tim Gunn; the competition series profiled up and coming designers with winning styles added to shop live every week to Amazon. She also currently serves as the host of “Germany’s Next Topmodel.”

Try out Heidi Klum’s sandal style for yourself with these sleek pairs.

Flip through the gallery to discover even more of Heidi Klum’s impressively glam style moments.