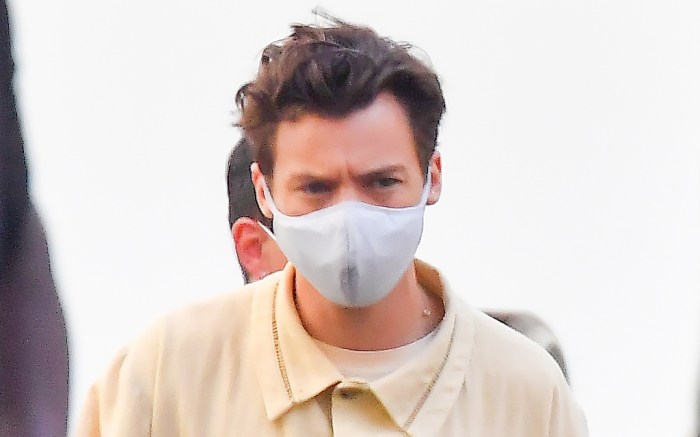 Harry Styles continued to show off his relaxed off-duty style on the set of “Don’t Worry, Darling” in Los Angeles.

Stepping out from his trailer between scenes yesterday, the “Watermelon Sugar” singer opted for a retro-inspired look with a little help from Bode. The unique, environmentally-friendly label creates one-of-a-kind pieces in New York by refurbishing linens, grain sacks, used fabrics and more eco-conscious materials. He layered the soft yellow top over slouchy white pants, reminiscent of trends from the 1970s.

When it came down to footwear, Styles opted for a throwback pair of shoes as well to top off his look. The style bears resemblance to classic Keds designs with its curved exposed stitching and shortened lace-up silhouette. The former One Direction member’s pair draws similarities to the brand’s Canvas Champion sneakers in a worn-in off-white colorway, tied together with mismatching pink and white laces.

While the brand stopped making men’s footwear in 2018, it launched its Pro-Keds line shortly after with pairs to fit men’s sizing. Similar unisex designs retail for $60 at ProKeds.com.

Earlier in the week on set, the singer modeled a stylish off-duty ensemble on Nov. 2. The comfy look included a $54 Free & Easy T-shirt that read “Don’t Trip” on the front and “Vote” repeated on the back teamed with sweats from The Elder Statesman. Though his style is currently sold out, sweatpants from the hit brand retail for over $1,000 at Mr. Porter.

The “Dunkirk” actor, for footwear, chose New Balance’s classic 574 silhouette, a retro-inspired design with mixed suede and textile uppers. Opting for a red, white and blue iteration, the $80 style has since sold out but can be found on the resale market from $80 to $164 at StockX.com. New Balance also offers the silhouette in a series of colorways on its website.

Click through the gallery to discover more of Harry Styles’ wow-worthy style evolution over the years.