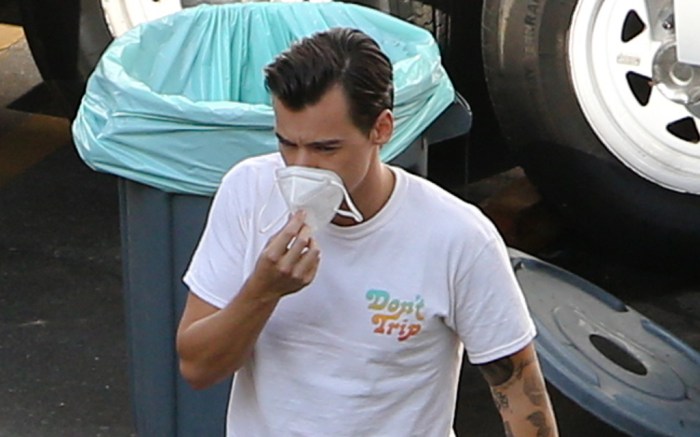 Harry Styles joined his new costars on the set of “Don’t Worry, Darling” in Los Angeles this week and gave fans a glimpse at his new look for the film.

Rocking a slicked-back hairdo, the former One Direction member bounced around set on Monday in a stylish off-duty ensemble. The comfy look included a $54 Free & Easy T-shirt that read “Don’t Trip” on the front and “Vote” repeated on the back teamed with sweats from The Elder Statesman. Though his style is currently sold out, sweatpants from the hit brand retail for over $1,000 at Mr. Porter.

When it came down to footwear, Styles opted for a relaxed pair of kicks from one of the year’s biggest brands: New Balance. The sportswear powerhouse was named the 2020 Athletic Brand of the Year for the upcoming FN Achievement Awards thanks to its successes in the sneaker world with hit collaborations and new must-have silhouettes.

The “Dunkirk” actor’s pair, in particular, came in the form of the brand’s classic 574 silhouette, a retro-inspired design with mixed suede and textile uppers. Opting for a red, white and blue iteration, the $80 style has since sold out but can be found on the resale market from $80 to $164 at StockX.com. New Balance also offers the silhouette in a series of colorways on its website.

Click through the gallery to take a look back at Harry Styles’ impressive style evolution over the years.